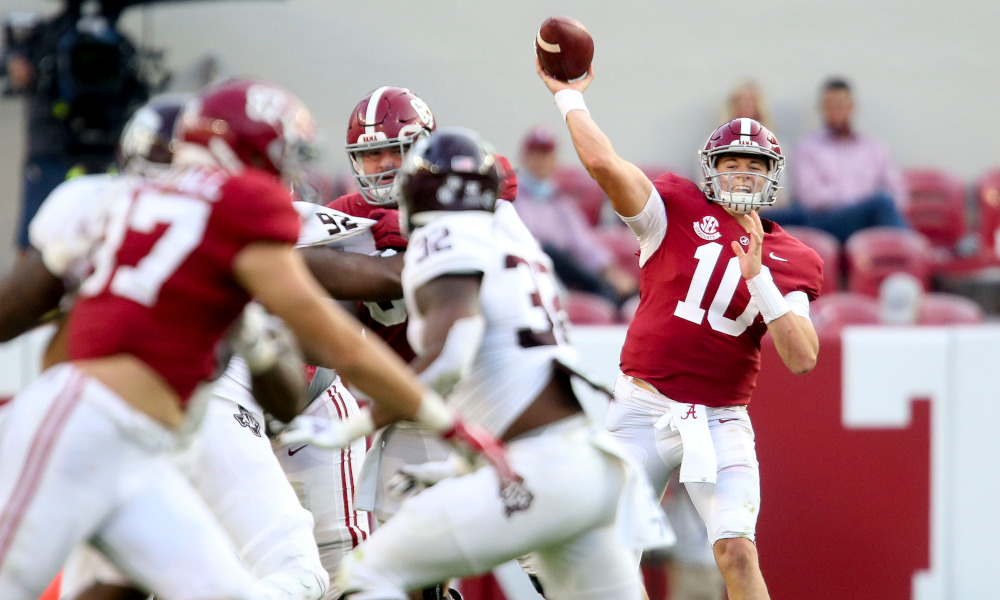 Through the first two games of this season, the University of Alabama knows it has a lethal weapon at quarterback.

For Mac Jones, he does not want the naysayers to stop now. All the doubt and criticism he took in the offseason has fueled a highly impressive start for the redshirt junior. He dealt with media pundits and external factors saying he could not operate Alabama’s offense like Tua Tagovailoa or push the team to a national championship.

With each statement, Jones’ response has been deep ball touchdowns to talented receivers and scoring points. After having a strong outing versus Missouri in week one, Jones turned in a career game in the Crimson Tide’s home opener against Texas A&M at Bryant-Denny Stadium.

Regardless of its veteran defensive front, Mike Elko and the Aggies had no answer for Jones.

Social distancing took place in the stadium, but it did not stop fans from standing and cheering on the native Floridian that was slinging scoring passes all game. The 6-foot-3, 214-pounder surgically picked Texas A&M apart in completing 20 of 27 passes (74.1 percent) for 435 yards with four touchdowns to one interception. He paced an offense that totaled 544 yards, converted five of 10 third downs and put 45 points on the scoreboard in a 52-24 rout of the Aggies.

Not only was he in complete control of torching the defensive secondary of Texas A&M, but Jones also positioned two of his wide receivers for career outings.

The duo of Jaylen Waddle and John Metchie could not be stopped. Both players caught five passes and while Waddle totaled 142 yards receiving with a touchdown, Metchie exploded for 181 yards and two scores. The tandem each brought in one long scoring pass from Jones and averaged over 25 yards per catch.

DeVonta Smith was also involved, totaling a team-high six receptions from Jones for 63 yards with a touchdown.

RELATED: Freshman DB Malachi Moore shows he is ready for the moment

As exciting as Tagovailoa was, Jones set two huge marks over the weekend. He is the only quarterback in Alabama history with three career touchdown passes of 85-plus yards.

The former four-star had a 94-yard scoring strike to Waddle in 2018 versus Louisiana-Lafayette, and then returned with an 85-yard score to Jerry Jeudy in the 2020 Citrus Bowl against Michigan.

During the third quarter against Texas A&M, Jones found Waddle on an 87-yard touchdown.

That’s the most by any QB in @AlabamaFTBL history. pic.twitter.com/GM61io9l9D

His output of 435 passing yards ranks fourth all-time in school history for a single game.

He is clicking on the field and former Tide standout, Mack Wilson thinks it’s time to look at Jones for Heisman.

So happy for @MacJones_10 man. He really shutting all the doubters up. Just look at this man pass the ball. You’d love to see it. Can’t wait to see him play again. ?? #RollTide

Ronnie Harrison, former Alabama safety, is proud of Jones and even Blake Sims is loving the deep ball.

Prior to the start of the season, yours truly of Touchdown Alabama Magazine spoke with three coaches in Florida who have worked with Jones.

All three stated he is in for a ‘Joe Burrow type of season’ and that he is a ‘silent assassin.’

According to Nick Saban, he loves the poise of his starting quarterback.

“I thought Mac (Jones) played really well in the game,” Saban said. “He did not get affected by the tipped ball for an interception. He did a really good job.”

He filled in for an injured Tagovailoa in 2019, but Jones has become more than a placeholder.

“The experience he got last year was invaluable,” Saban said of Jones. “I thought he played fairly well when he played last year. The mistakes were just costly, but he learned from them. So, we expect Mac to develop maturity and confidence. He is very smart, he’s bright, he’s very accurate with the ball and we have some good skill guys. The strength of our team is being able to utilize those guys. Mac has been playing very well, but that is what we expect him to do.”

When it comes to his deep ball, Jones has been crafting it since his freshman year on the scout team.

He was throwing bombs to Tyrell Shavers (now at Mississippi State) then and now, it has grown to him attacking one of Saban’s former assistant coaches with it. Jones is gearing for Ole Miss this week, but he is proving all doubters wrong as of now.

Since getting his first start versus Arkansas last year, Jones has guided Alabama’s offense to three 40+ point games.

With the Rebels allowing 40 points to Kentucky, Lane Kiffin may have a long day on his hands.