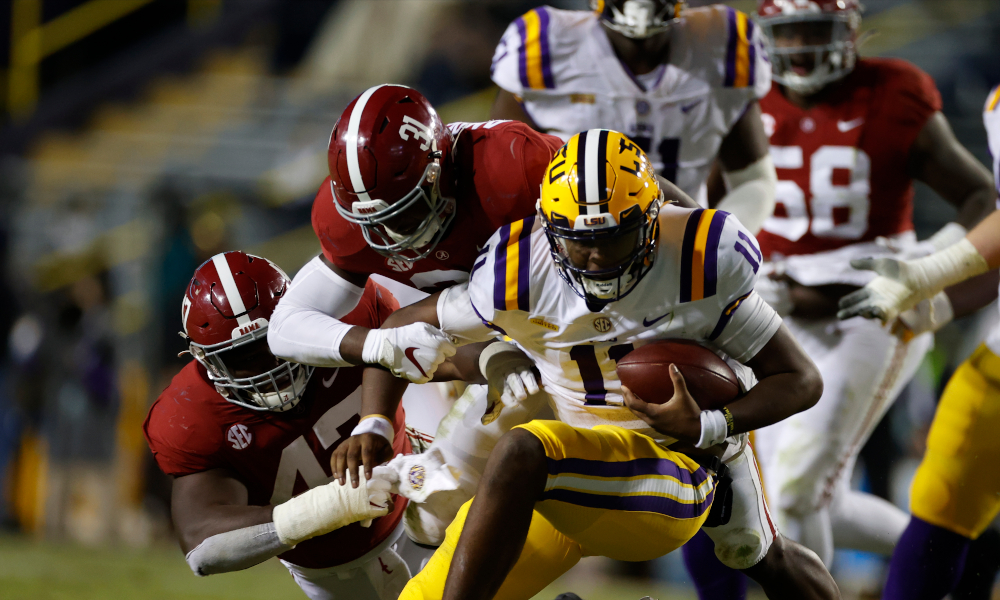 He has found his game and the rest of college football should be very afraid.

William Anderson, Alabama’s true freshman at outside linebacker, has emerged in the last six games as the pass rusher the Crimson Tide has lacked since Tim Williams. After recording his first sack versus Auburn in the Iron Bowl, he returned with a breakout performance against Louisiana State University over the weekend at Tiger Stadium. Anderson not only affected the passing game of T.J. Finley and Max Johnson, but he also won the edge in stopping the Tigers twice on fourth down.

Even without having his position coach, Sal Sunseri, the five-star athlete tore it up on the field.

One of Anderson’s first impactful plays came on LSU’s first possession. Finley and Tigers were mixing the run and pass game effectively and the team got into the red zone. With the ball on the Tide’s 15-yard line, Ed Orgeron decided to go for it on fourth down with one yard to go. Anderson and Christian Harris both met Ty Davis-Price in the backfield for no gain. The effort from Anderson had the Alabama sideline excited, as he helped force a turnover on downs and it led to the Tide getting a 14-0 lead.

The native Georgian shared a team-high eight total tackles with DeMarcco Hellams. Anderson led the team in sacks (two) and tackles for loss (two) in a 55-17 victory for Alabama. He picked up his first-ever outing with multiple sacks and set the pace for Nick Saban’s defense to have five sacks, seven tackles for loss, two forced fumbles and one fumble recovery (Christopher Allen).

For Tim Williams, his first game against LSU in 2015 credited him with one tackle and half a sack.

He potentially has four games left this season — postseason included — and if he can average at least two sacks and two stops for loss per game, Anderson will surpass Williams’ numbers from his junior season as a freshman.

He leads this Alabama team in quarterback pressures, and Anderson is locked in for more.