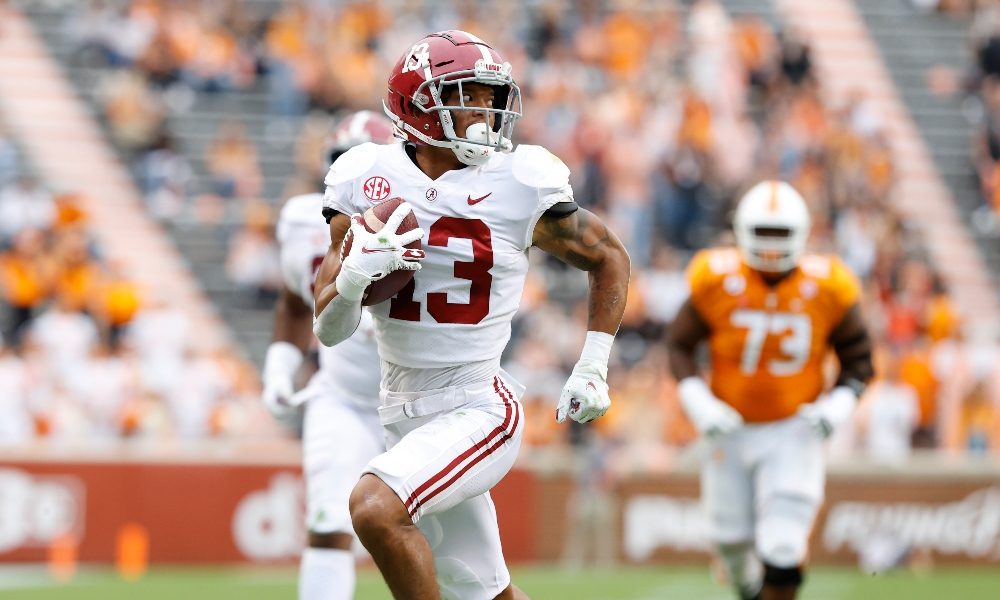 During its six victories in Southeastern Conference Championship Games under Nick Saban, Alabama football was able to accomplish some intriguing feats.

Whether it was Mark Ingram (2009) and Derrick Henry (2015) finishing off Heisman campaigns with huge performances, Blake Sims putting on a show versus Missouri in 2014, its defense terrorizing Florida in the 2015 and 2016 SEC title matchups or the contest with Georgia in 2012 that went down to the wire, the Crimson Tide has pulled out some interesting moments.

The one thing it has not done is have a true freshman be impactful on defense in the venue.

Marlon Humphrey, a redshirt freshman, recorded an interception in the 2015 game against Florida.

Aside from that, Tide fans have yet to see a freshman take over the SEC Championship stage on defense. Offensively, on the other hand, Saban witnessed Mark Ingram, Julio Jones, T.J. Yeldon, Amari Cooper, Calvin Ridley, Josh Jacobs and Jaylen Waddle all have impact plays.

This weekend has the potential to be different.

Alabama has five freshmen — Malachi Moore, William Anderson, Brian Branch, Tim Smith and Jamil Burroughs — who have provided big plays throughout the season. Despite not having spring football, these young men bought into the system, learned the Tide’s scheme via Zoom and positioned themselves to be either starters or quality contributors. While all five bring something different to the table, one former Alabama legend really likes Moore. The four-star has been the Defensive MVP all year long.

Moore, a native of Trussville, Ala., has drawn many comparisons to Minkah Fitzpatrick and George Teague.

Not only is he among the team leaders for total tackles (41), but he is also aggressive in creating negative plays. He has four tackles for loss, six pass breakups, two quarterback hurries, one forced fumble, one fumble recovery, three interceptions (team-high) and one touchdown.

It seems as though Pro Football Focus, a website that dives into the analytics of both college and professional football, has an insane graphic on Moore each week. On Wednesday, it released its latest one on the freshman.

He has locked up every receiver in the slot and per Teague, the legend looks at Moore as a ‘really good’ defensive back.

On the latest episode of “The Riley & @constant451 Show w/@comicstevebrown”, @AlabamaFTBL legend @Teaguefootball gives his thoughts on @malachi_moore13.

“I am not being biased because he wears No. 13, but it does make him smart,” Teague said of Moore in Tuesday’s segment of the Riley and Constant show via The Sports Cast. “The way he plays man-to-man, breaks on the ball, he’s got it. You can tell he’s got some s*** in the tank. He’s aggressive, he is always trying to take the ball. I think he is up and coming. Over the next couple of years, you are going to really see him fly up the charts.”

Teague also mentioned that Moore and Branch play well off each other.

The 6-foot, 182-pounder may be tasked with defending Florida’s fastest player in Kadarius Toney in the slot.

After he handled Anthony Schwartz of Auburn, who is arguably the fastest player in college football, Moore is prepared to limit what Toney wants to do on the field. The quartet of Anderson, Branch, Smith and Burroughs are marquee players too, but hearing Teague discuss Moore makes him the player to watch.

Is he set up to be the Tide’s biggest defensive player against the Gators?

Moore was not highly discussed on the recruiting trail; however, his intelligence and hard work opened this opportunity. He is set to make some splash plays at Mercedes-Benz Stadium.