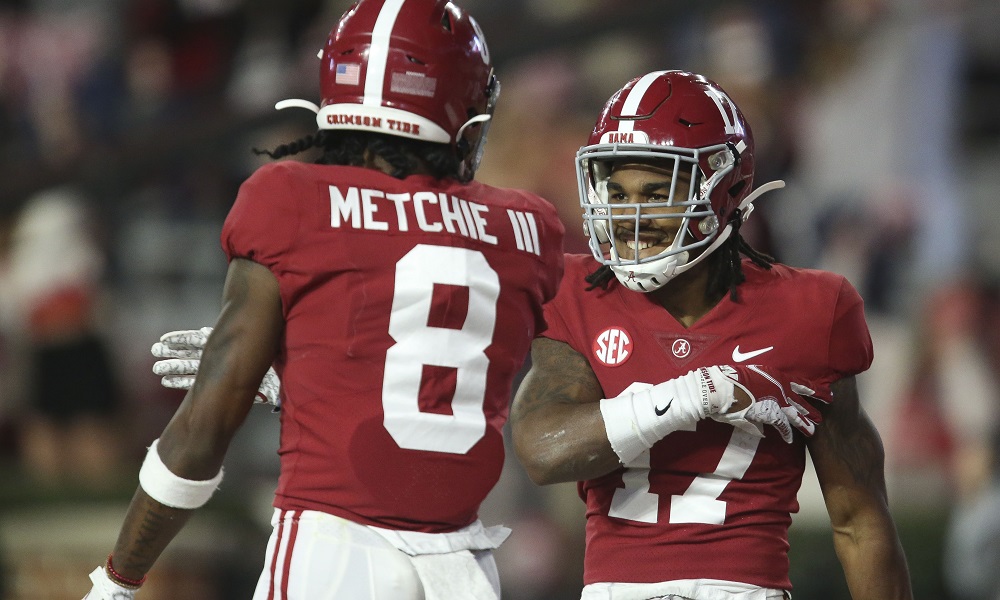 He is regarded by most as a first-round draft pick and one of the most explosive players in college football.

In his third year at wide receiver for the University of Alabama, Jaylen Waddle suffered a right ankle injury against Tennessee back on Oct. 24, 2020. The mishap came on the opening kickoff return and since then, the former four-star missed the next seven matchups for the Crimson Tide. Alabama has not missed a beat in his absence, especially with the dominance shown by DeVonta Smith, but there is an opportunity for Waddle to return to action.

According to Nick Saban, he was cleared by the medical staff to practice this week. If he does not have any discomfort with his maneuvers, Waddle has a chance to play in the College Football Playoff National Championship Game versus Ohio State next week. He recorded 25 catches for 557 yards with four touchdown, prior to the injury, and averaged 23 yards per reception and 111.4 yards per game. Waddle posted four 100-yard performances.

When his teammates were asked about him on Wednesday, the trio of Smith, Mac Jones and John Metchie are amazed about how fast he has been able to recover.

RELATED: DeVonta Smith is ready to end his tenure at Alabama with a CFP National Championship

Metchie, a sophomore, said Waddle is ‘on top of everything’ in his recovery.

For Smith, the 2020 Heisman Trophy winner is just happy to see his teammate continuing to push.

Coach Saban told Chris Low of ESPN that Waddle ‘has a chance to play‘ against the Buckeyes. Everything comes down to how he feels leading up to the matchup. Alabama fans would love nothing more than to have No. 17 suit up at HardRock Stadium on Monday, Jan. 11.

He wants to be back on the field, but we shall see what happens.