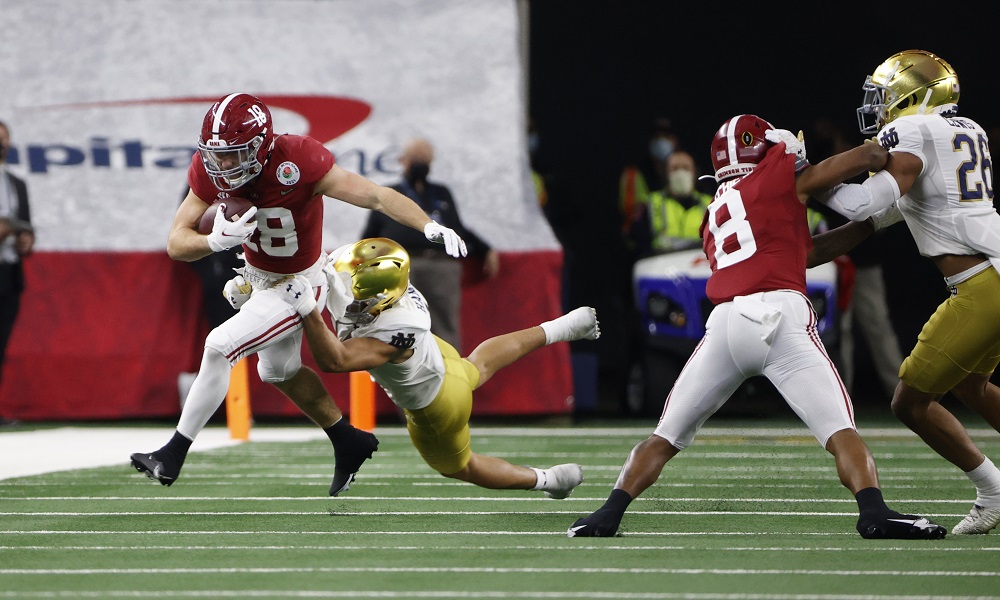 The confetti fell on him in January, as he helped Alabama football capture a national championship, but Slade Bolden enters his fourth season in the program at wide receiver.

Hailing from West Monroe, La., Bolden had some clutch moments in the slot last year.

When an ankle injury forced Jaylen Waddle out of a matchup versus Tennessee, the former three-star emerged and turned in a career outing. Bolden, a former high school quarterback, totaled six receptions for 94 yards in the Crimson Tide’s 48-17 victory over the Volunteers. He caught four passes against Arkansas, all of which converted first downs.

Both of his catches in the Southeastern Conference Championship Game against Florida went for first downs, while his two receptions in the Rose Bowl Game versus Notre Dame kept drives alive. Bolden was responsible for three receptions, including one for a touchdown in the College Football Playoff National Championship Game against Ohio State. He finished with 24 catches for 270 yards with one score; however, he is looking for a shot to be a starter. The 5-foot-11, 191-pounder will get his chance to start spring practice, but will he be able to fend off Alabama’s freshmen class? This is the question for Bolden, especially with the conversation Christian Leary has created in the Fourth Quarter Program. Leary, a native of Orlando, Fla., brings incredible speed, hands, routes, and playmaking abilities to the position. The Crimson Tide’s coaching staff is very excited about his skill set.

After Leary, the Tide has Agiye Hall and Ja’Corey Brooks. Both players possess the size to play outside, but they can also be productive in the slot too. Bolden joins John Metchie and Xavier Williams as a veteran that will begin spring football at one of the three starting spots. He may not the explosive abilities as others do; however, Bolden has proven his capability to make plays.

He achieved his first career touchdown catch and was one of six targets to catch at least 20 passes in 2020.

Leary and company bring a lot to the table, but Bolden has gained a lot of experience.

Next week, he intends on showing the coaches why he should start in the coming fall.