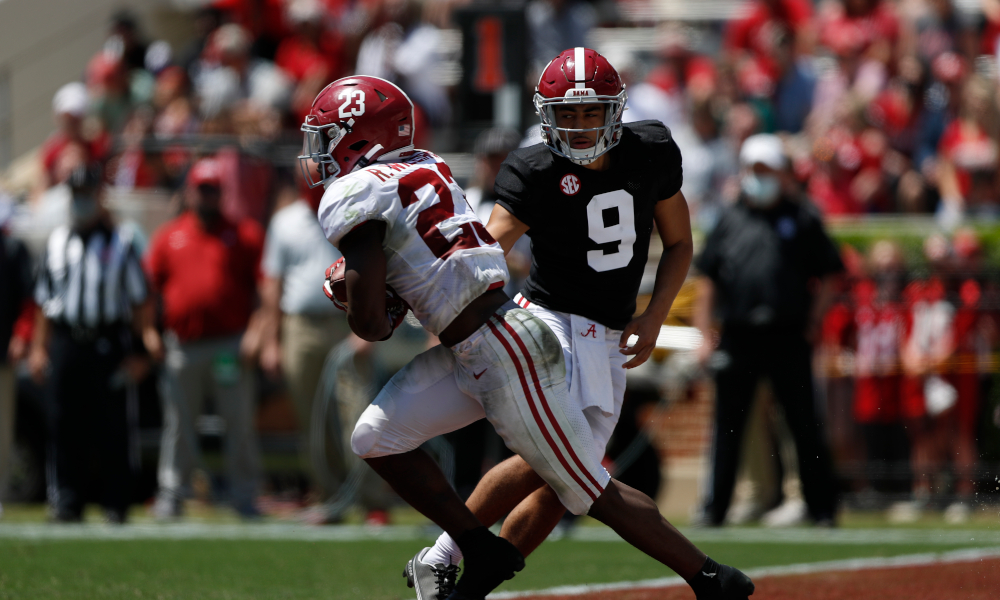 Pro Football Focus has Alabama’s offense ranked No. 4 in college football, and it has Young at No. 22 for quarterbacks.

Lincoln Riley’s Oklahoma offense is the best in the country 🚀 pic.twitter.com/q23mk8nrdx

People want to see if the marriage between him and Bill O’Brien will work. After watching the sensational season of Mac Jones, Young looks to continue the explosive plays on offense. He turned in a strong performance on A-Day, recording 333 passing yards with one touchdown. The sophomore was the Dixie Howell Most Valuable Player; however, he knows this season is important.

RELATED: Alabama’s defense projects as No. 1 in college football, according to Pro Football Focus

During Wednesday’s airing of In My Own Words, yours truly of Touchdown Alabama Magazine featured Bo Scarbrough.

Scarbrough, like Young, was a five-star prospect out of high school. The Tuscaloosa native was a two-time national champion (2015, 2017) and a dominant year in 2016. He totaled 812 yards rushing with 11 touchdowns on 125 carries, including a record-setting performance against Washington in the College Football Playoff semifinal (Chick-fil-A Peach Bowl). Scarbrough had 180 rushing yards with two scores on 19 carries, propelling the Tide to a 24-7 victory over the Huskies. As one of the popular student-athletes of the Nick Saban era, he highlighted Young as someone he is very excited to see in the upcoming season for Alabama.

“When I came back to Alabama to finish school, I had a class with him,” Scarbrough said of Young. “He is such a great guy, has a great attitude, and he’s very humble. He always wants to learn.”

Coach Saban shares Scarbrough’s sentiments about Young. He spoke to reporters during the spring on Young’s leadership, confidence, willingness to learn, playmaking abilities, and command of the team. A lot will be placed on his shoulders, but Scarbrough feels that Young is ready for it. In 2016, Scarbrough carried the offense in the latter portion of the season.

If not for an injury versus Clemson in the 2017 CFP National Championship Game, he would have guided Alabama to victory.

He was impressive as a first-year impact player, but Scarbrough wants to see Young be impactful too.