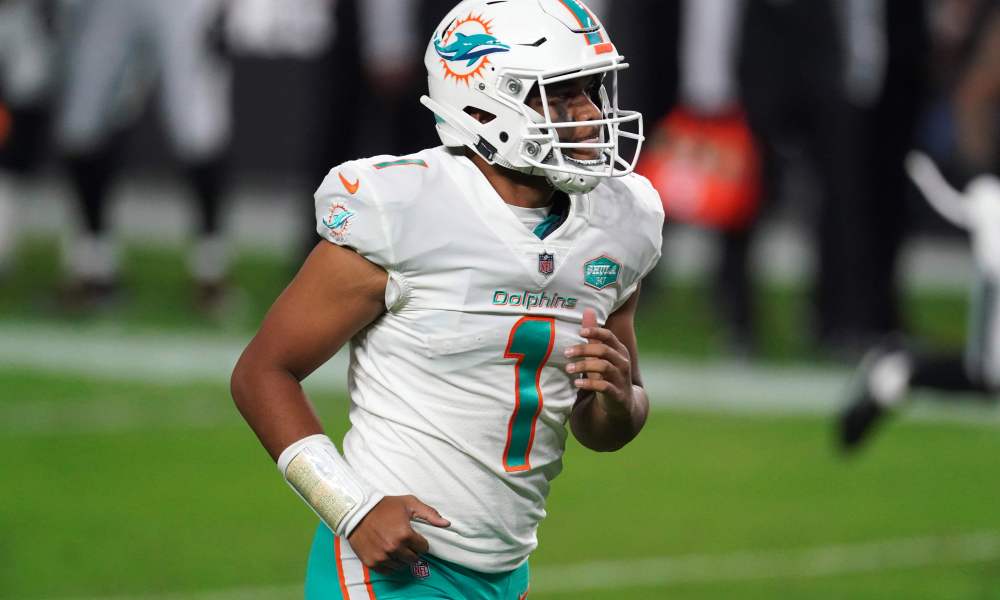 All the doubters Tua Tagovailoa had in the summer have gone quiet.

In the first week of training camp for the Miami Dolphins, the second-year quarterback told reporters that the “it” factor in his game has returned. Tagovailoa was not joking. This is the best people have seen him look since his freshman season at the University of Alabama.

His body is stronger, his mobility is back, and his arm has media and fans going absolutely nuts.

Last week, Tagovailoa had four practices where he did not toss an interception.

That was the fourth-straight practice from Tua Tagovailoa without an interception in 11 on 11. And it comes while the offense continues to (successfully) push the ball down the field.

He is driving the ball downfield, he is mixing speeds on his passes, and he is scoring touchdowns. Miami is set to have an explosive offense, and Tagovailoa has chemistry with multiple wide receivers. He has connected with Albert Wilson, Will Fuller, Jaylen Waddle, DeVante Parker, Robert Foster, and Mack Hollins for scores. Dolphin fans have been chanting Tagovailoa’s name in practices because they see something special is about to happen. Miami’s coaching staff and its players never doubted its first-round selection from the 2020 NFL Draft.

Eric Rowe, a safety, explained to reporters after one practice why Tagovailoa is set to take off this season. Despite some issues, he achieved a 6-3 record as a starter during his rookie season.

Chan Gailey was Miami’s offensive coordinator in 2020, but he’s no longer there. The Dolphins have a co-OC team of George Godsey and Eric Studesville. Charlie Frye, Tagovailoa’s coach at the Elite 11 competition in 2016, is the Dolphins’ quarterbacks coach. Frye helped the native Hawaiian win the Most Valuable Player of the competition before he enrolled at Alabama.

Tagovailoa’s special ability as a passer was first on display for the Crimson Tide in the 2018 College Football Playoff National Championship Game. He replaced Jalen Hurts in the second half and tossed three touchdowns, including a 41-yard game-winning strike to DeVonta Smith against Georgia. Regardless of some injuries, Tagovailoa brought an offensive evolution to Alabama football. He is expected to make a big jump this fall, and he is showing positive signs in camp that he is prepared.