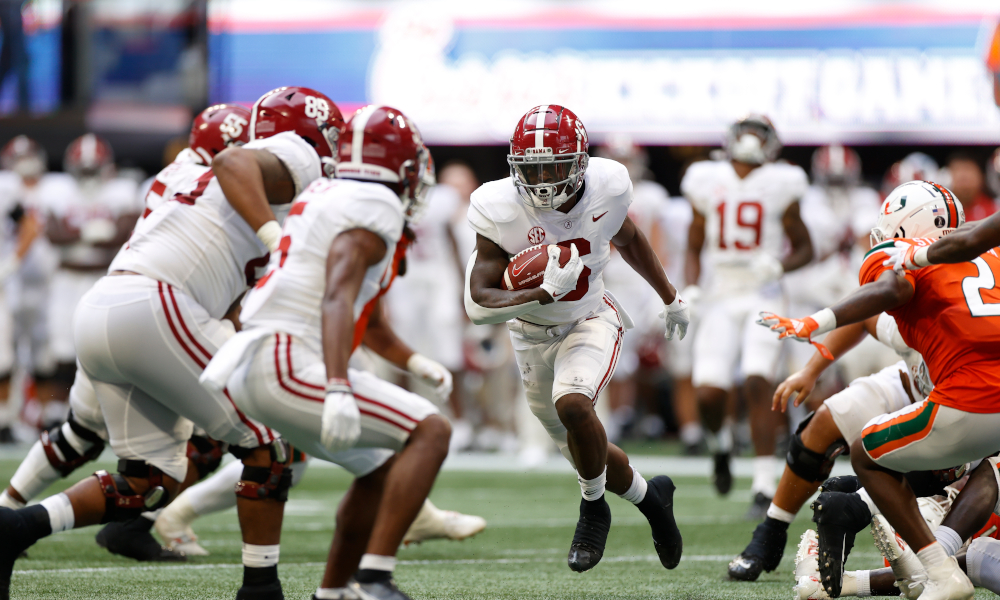 We have not seen much of him since matchups versus Miami and Mercer, but Trey Sanders is about to cash in on an opportunity against Texas A&M for Alabama football.

After a knee injury knocked out Jase McClellan for the season, Sanders is about to get more carries.

The redshirt sophomore had Crimson Tide fans filled with tears of joy in week one. He returned from two serious injuries to record his first rushing touchdown as an Alabama running back. Sanders hugged everyone when he reached the Tide’s sideline, including Jeremy Gsell. Gsell, the Director of Rehabilitation at Alabama, has guided the former five-star throughout his journey to return to the field.

He posted a couple of nice runs in a matchup with Mercer; however, Sanders wants fans to see more.

The 6-foot, 214-pounder is a natural runner between the tackles.

He has burst in space and speed in the open field. We have not seen him in blitz protection or catch passes out the backfield, but the alumnus of IMG Academy is capable of handling that too.

Alabama needs to provide Sanders with game experience, especially with McClellan out and Camar Wheaton (meniscus injury) not medically cleared to practice. He could be the best player at the position, yet we will not know unless he is consistently in action. Sanders has 83 yards rushing on 20 carries in four games.

Marquee players perform the best under the lights in hostile environments. He faced elite competition in high school, so the big stage is not new to Sanders.

All he wants is a chance to prove himself.

Coach Nick Saban will put the ball in Sanders’ court at Kyle Field.