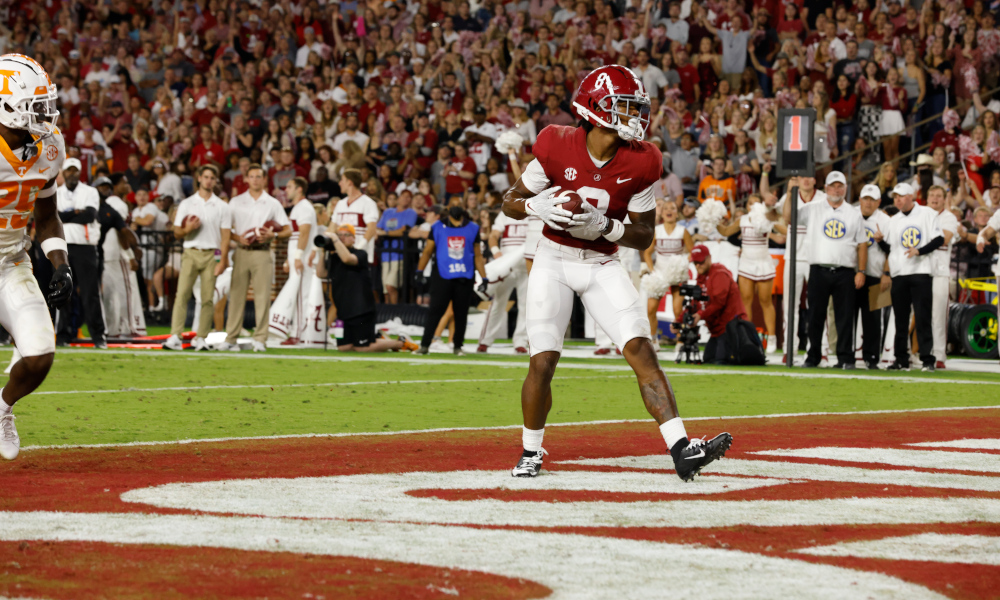 After he had a rough outing against Texas A&M, Nick Saban told reporters that Alabama wide receiver John Metchie was recovering from surgeries to fix injuries he had in 2020.

Metchie benefitted from DeVonta Smith and Jaylen Waddle last year. As the No. 3 option, he created marquee plays in the passing game.

The 6-foot, 195-pounder had two 100-yard performances. He finished the season with 916 yards and six touchdowns on 55 receptions.

Injuries kept him from participating in spring practice, but Metchie appears to be healthy — especially with his outings in back-to-back games. He was Bryce Young’s go-to receiver last week versus Tennessee.

Metchie caught 11 passes (13 targets) for 121 yards with two touchdowns. He averaged 11 yards per catch, while eight of his receptions resulted in first downs or scores. His 6-yard touchdown from Young gave the Crimson Tide a 21-14 lead at halftime, and his 19-yard score in the fourth quarter put the game away. Metchie was explosive on crossing routes, post patterns, screens, and timing routes. He possessed a bounce in his step and excelled in working back to Young. During the preseason, the sophomore quarterback said Metchie is the ‘cornerstone of Alabama’s offense.’ His words have come to life in two weeks.

Metchie’s performance comes off a 100-yard game against Mississippi State. He totaled seven catches for 117 yards and a touchdown in the Tide’s 49-9 rout of the Bulldogs. The game opened with him scoring a 46-yard touchdown at Davis Wade Stadium in Starkville, Miss. When he is healthy, Metchie is one of the best receiving options in college football.

This is the second time he has burned the Volunteers. Metchie replaced an injured Waddle at Neyland Stadium in 2020 and caught a game-high seven passes for 151 yards receiving. He assisted the Tide to a 48-17 victory over Tennessee.

According to Jalyn Armour-Davis, the junior cornerback said Metchie gives the team ‘a ton of confidence.’

“We have seen the things he’s done in the past,” Armour-Davis said. “He comes to practice and works hard every day, regardless of last week’s outcome. So, we have the utmost respect for him.”

Metchie leads Alabama for receptions (52) and has 601 yards with five scores.

He will rest this week, but Metchie will pursue a third 100-yard game against LSU.