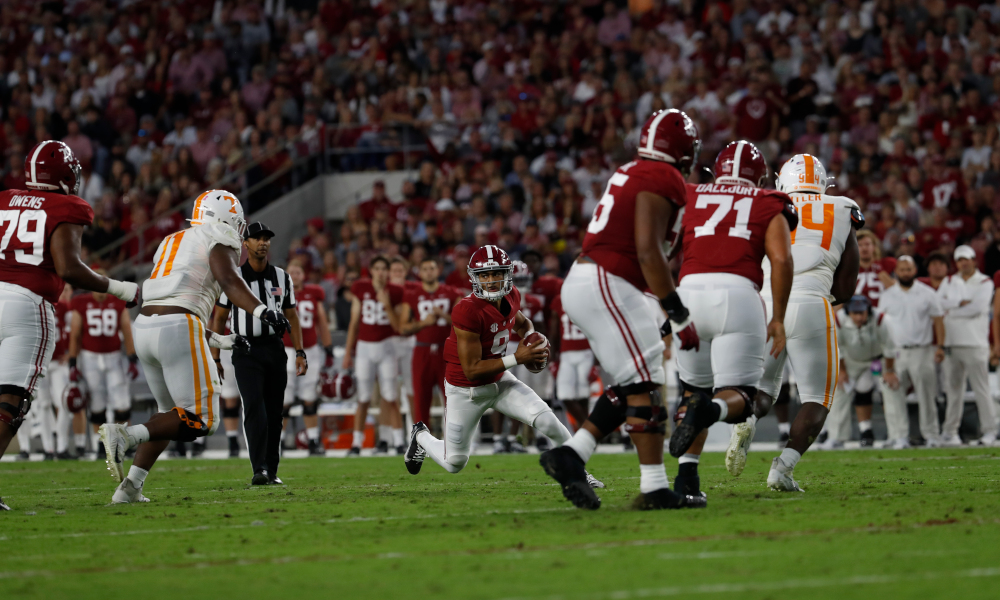 Bryce Young is starting to click on all cylinders as Alabama gets deeper into the season.

His deep ball accuracy will continue to develop, but he is showing championship-caliber traits. The sophomore quarterback is setting different records and is at the forefront of the Heisman Trophy race. As a first-year starter, he ranks in the top-10 nationally for passing yards (2,453), touchdown passes (26), passer rating (177.1), and quarterback rating (88.5).

Young has five games with at least 300 passing yards, including his latest outing versus Tennessee. He put on a show at Bryant-Denny Stadium for homecoming, totaling a career-high 371 passing yards.

The California native became the first signal-caller in school history to record 350+ passing yards and two rushing scores in a single matchup. Young had four total touchdowns, guiding the Crimson Tide to a 52-24 victory.

His performance earned him a Davey O’Brien “Great 8” weekly honor for the fourth time this season. He was recognized after Alabama’s wins over Miami, Southern Mississippi, and Mississippi State too. Young has six games where he has thrown at least three touchdown passes.

Since 1981, the Davey O’Brien Memorial Trophy is now the Davey O’Brien Award. It is presented primarily to quarterbacks, and Mac Jones won it last season for the Tide. Young is having a great year and is in line to be the second one to win it for Alabama.

He won the Davey O’Brien National Quarterback of the Week honor for his efforts versus Miami.

The 6-foot, 194-pounder started Alabama’s season with 344 passing yards and four touchdowns. He is sixth all-time in Tide history for scoring tosses in a single season. Tua Tagovailoa has the record with 43 touchdown passes in 2018.