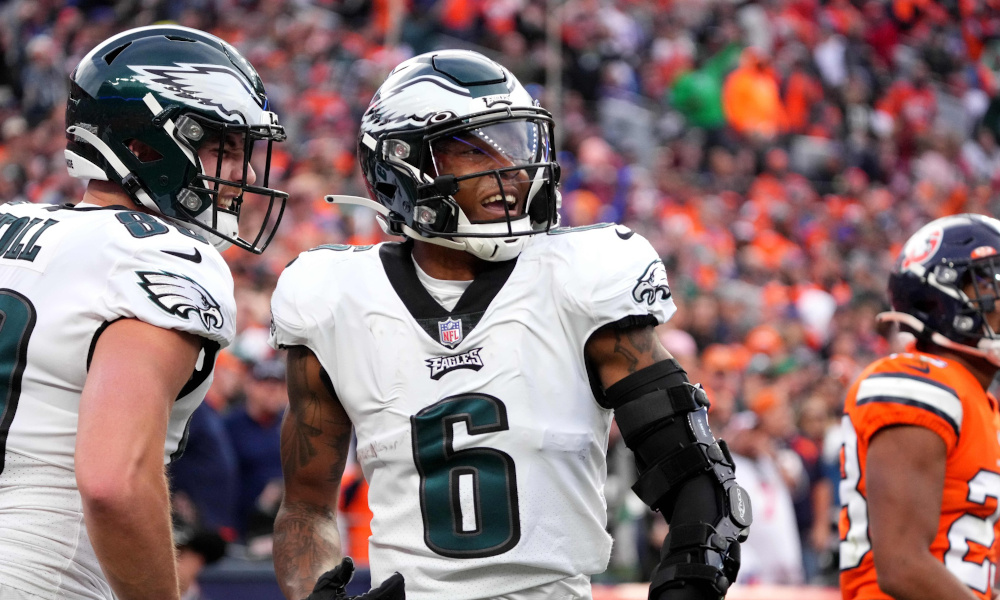 Nick Saban runs Alabama football, but one can argue he runs the National Football League too.

The professional game is full of Crimson Tide alums under his guidance. He has the biggest tool to land recruits, and Sunday’s unique sequence in the Eagles-Broncos matchup showed it. Philadelphia had a 3-0 lead in the first quarter when Nick Sirianni decided to go for a big play. Landon Dickerson, who was Alabama’s starting center in 2020, snapped the ball to Jalen Hurts.

RELATED: Alabama will have a new challenge versus Auburn with Bo Nix out

Hurts was a quarterback for three years in Tuscaloosa — two years as a starter — and for the Eagles, the native Texan was targeting a specific wide receiver on the play. DeVonta Smith, the Crimson Tide’s 2020 Heisman Trophy winner, was the receiver and Patrick Surtain II (former Alabama cornerback) was the defender. Four Alabama alums were involved on one play, as Hurts connected with Smith for a 36-yard touchdown. Surtain had perfect coverage, but it was a better offensive play for the Eagles.

Bama rookies going at it 🔥

All four individuals won a national championship under Coach Saban. Smith, who celebrated his 23rd birthday, caught two touchdown passes against the Broncos. He was happy to be instrumental in Philadelphia’s 30-13 victory, especially with tallying a game-high four receptions and two scores. Smith had 66 yards receiving on an average of 16.5 yards per catch versus Denver.

RELATED: Kickoff time and network announced for Alabama vs Auburn

Former NFL players, sports personalities, and Alabama fans reacted on Twitter to the moment all four Tide alums were in.

Alabama, to Alabama, on Alabama crime!! I fricking love it. Hurts, to Smith, on Surtain Jr. that’s just football. I’m sure this happen on the grass in Tuscaloosa. Nick somewhere chilling looking at his rings, eating oatmeal pies, and say “I see ya boys!”.

He may not watch every game, but Saban is proud of his players. They came to Alabama hungry, demonstrated first-class character in Tuscaloosa, and now they are having success in the pros. Hurts, Smith, and Dickerson have won two of their last three games with the Eagles. The trio is finding its groove, and the team is looking better.

At 4-6, the Eagles are still alive for a playoff opportunity.