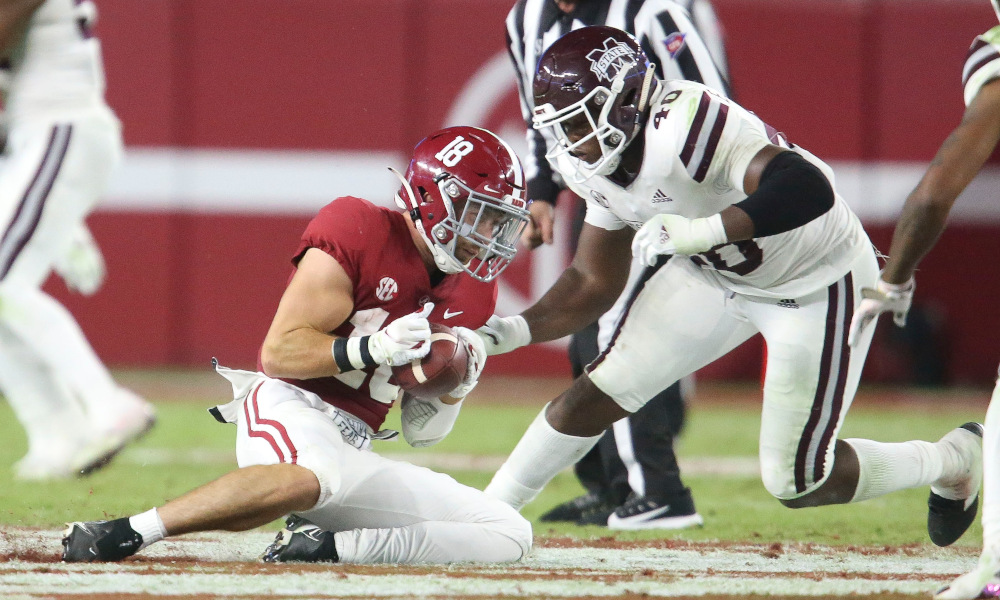 The Patriots don’t typically put an emphasis on selecting wide receivers when it comes to the NFL Draft. In fact, it has a borderline disastrous history when it comes to evaluating that position group. But every so often New England finds its man for the job and the criteria the team looks for is so specific to the point where its become a stereotype.

Just look at the team’s most successful receivers of recent memory, Julian Edelman and Wes Welker. The two have identical skillsets, as both can be described as undersized, shifty, gritty and tough amongst other noticeable characteristics.

So whenever the next batch of NFL receivers enters the draft everyone is usually on the lookout for the next “Patriots receiver” and this year teams don’t need to look too far.

Alabama wide receiver Slade Bolden checks nearly every box the Patriots look for, and he went the extra mile on Wednesday during media availability at the NFL Combine to make sure everyone was aware of his affinity for Edelman’s game.

“That’s the easiest answer I have. Julian Edelman for sure,” Bolden said when asked who he models his game after. “Just the way he played the game. How he works. His mindset going into a game: ‘You can’t guard me, you can’t stop me, I’m going to catch everything.’ That kind of mindset, I kind of see myself being that kind of person. I try to emulate that as best I can.”

Crimson Tide head coach Nick Saban has been known in the past to put in a good word for his former players to his longtime friend and Patriots head coach Bill Belichick ahead of the draft. Bolden, amongst other Alabama wide receivers, will be hoping for a rave review from the seven-time national champion, but the players will also likely be getting some praise from their offensive coordinator Bill O’Brien.

O’Brien was a part of Belichick’s staff in New England from 2007-11 and was the offensive coordinator during his final season in Foxboro. During his one year with Bolden, O’Brien would have him watch film of Welker on the Patriots hoping to entice Bolden to emulate him.

Other than his playstyle, Bolden has a unique connection with Patriots starting quarterback Mac Jones who was his teammate at Alabama. The two were well known for having a close relationship on and off the field, with Jones consistently praising Bolden for his willingness to always wake up and go work out with him during the offseason.

“I’m pretty close with Mac Jones,” Bolden said. “Obviously we played together and we were roommates at one time. He was actually my host on my official (visit) so that’s how we got connected. I facetimed him about three weeks ago and we were just talking about the whole training camp process going into the Combine and he kind of calmed me down and told me to be myself and have fun and be confident in myself.

“Playing with Mac would be cool. It would be an easy transition for sure. Whoever gives me the opportunity I’ll be thankful and I will take on that opportunity.”

After hearing his comments from today, Edelman himself gave Bolden his stamp of approval.