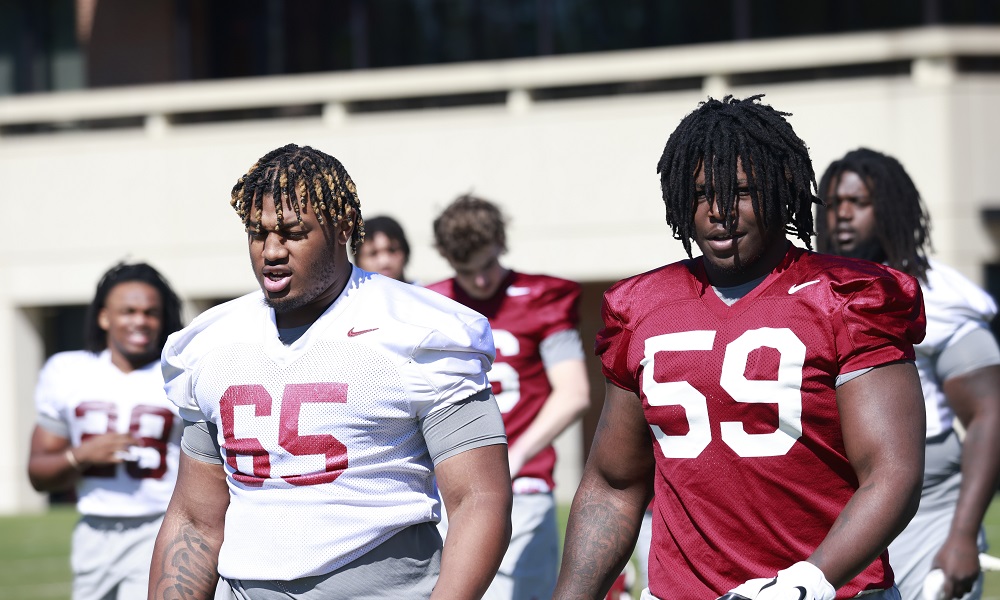 Upgrading the offensive line has been one of Alabama’s top priorities leading into fall camp and for good reason. Unlike Crimson Tide teams of the past, it struggled with consistency in both the pass and run game, causing the offense to become stagnant at points.

With the loss of its two starting tackles in Chris Owens and first-round pick Evan Neal, the unit’s most important spots needed to be addressed by new offensive line coach Eric Wolford. But with six practices down and out of the way, sophomore JC Latham appears to be rising to the occasion.

A former five-star recruit, Latham was one of Alabama’s top prospects from the class of 2021 and after serving as a reserve at guard, he has made major strides moving back out to tackle where he looks to earn a starting role.

“He’s made a lot of progress,” Saban said. “He’s a lot more confident. He’s very physical. I think he’s got a better understanding of what he’s supposed to do, why it’s important to do it that way, how we are supposed to do it, and he’s playing extremely well. I’m pleased with both tackles so far in camp.”

Since the conclusion of last season, Latham has logged several hours in the offseason to master his craft. he sought out senior offensive guard Emil Ekiyor, the most experienced lineman on Alabama’s roster, to put in some extra hours which went a long way with Ekiyor.

“That’s my guy man,” Ekiyor said. “He came in from Day 1 his freshman year just ready to work, ready to put in extra work. Me and him this summer, we got a lot of reps. Late nights, 11 o’clock, we’d come here to the facility to get some extra pass sets and stuff. It’s been really good working with him to try just take him under my wing as an older guy.

“He’s put in a lot of work this offseason, and I feel like he’s gonna have a really big year.”

Standing at 6-foot-6, Latham is an imposing figure whose natural ability as a tackle accompanied by his work ethic could turn him into the answer the Crimson Tide needs with the help of Eric Wolford.

Opposite of Latham, the other expected tackle on Alabama’s line is Vanderbilt transfer Tyler Steen. Steen provides SEC experience to the tackle position that Wolford’s group needs. In his short time at Alabama, Steen has appeared to have impressed as well.

“I’m super excited to keep watching him get more comfortable, but he’s been doing a really good job.”