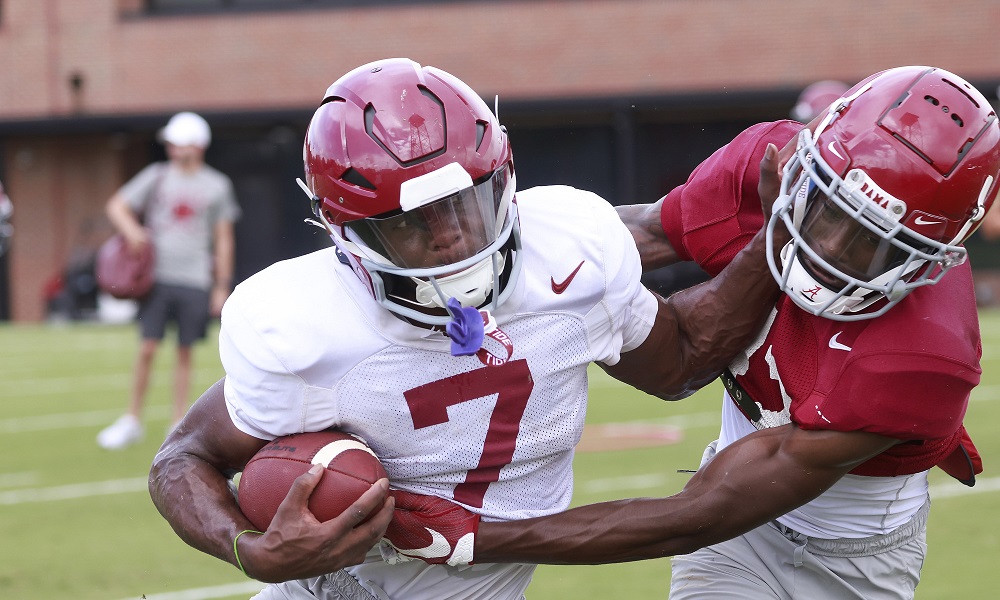 JoJo Earle, a sophomore from Aledo, Texas, suffered a foot fracture in practice.

RELATED: JC Latham is a major upgrade on the offensive line for Alabama

According to Nick Saban, the talented receiver will miss 6-8 weeks and could return in October. Earle was having a good camp as a receiver and return specialist before the injury. The Crimson Tide has to find someone to replace him on kickoff returns, but the team has depth at the receiver position. Jermaine Burton has been the most consistent player, but the Tide has a second-year receiver who is ready to step up more. Ja’Corey Brooks, a South Florida native, enters his sophomore campaign with confidence.

Brooks soaked up information from Jameson Williams and John Metchie during his freshman season. Saban and Bryce Young raved about his competitiveness, routes, hands, and willingness to do anything for the team. Brooks started on special teams and it allowed his role to increase at receiver. He blocked a punt for a touchdown versus Texas A&M, but his best moment came against Auburn. The Tide needed someone to step up when Jameson Williams got ejected for targeting. Brooks seized the moment, catching two passes in the fourth quarter. His 28-yard touchdown reception from Young tied the game at 10, forcing overtime at Jordan-Hare Stadium. Brooks’ efforts helped Alabama to a 24-22 victory, and he brought in a 44-yard score in the Cotton Bowl versus Cincinnati. He finished the season with 15 catches for 192 yards and two touchdowns, but Brooks knows he is capable of more. Coach Saban brought in Burton and Tyler Harrell from the transfer portal, yet competition does bother Brooks.

His chemistry with Young is strong, and it has a chance to be stronger during Saturday’s scrimmage.

Saban highlighted Brooks as one of the veteran receivers competing for a starting job.

“He is doing well,” Saban said of Brooks. “He is very competitive, smart, plays with a lot of toughness, very physical, and has  good hands.”

Saban said all of Alabama’s veteran receivers have ‘gotten better,’ but this weekend will test their progress. The Tide has veterans, transfers, and freshmen competing at wide receiver. Alabama signed five freshmen — Aaron Anderson, Kendrick Law, Isaiah Bond, Shazz Preston, and Kobe Prentice — and all are flashing potential in fall camp.

It will be interesting to see who wins the starting jobs, but Brooks is positioning himself to be one of them.