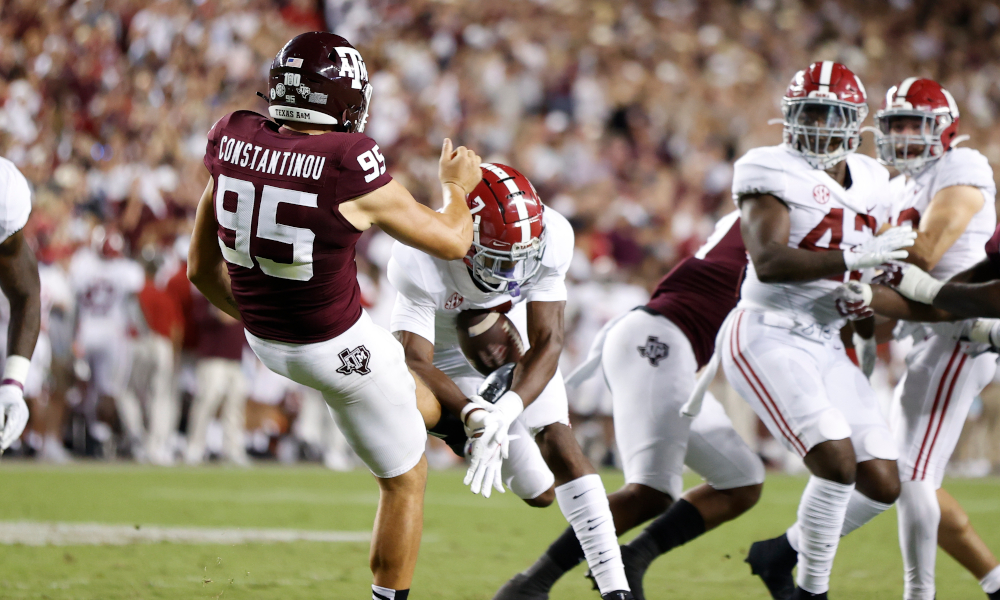 After previewing Roydell Williams, we made it to wide receiver Ja’Corey Brooks at No. 21

Ja’Corey Brooks is another exciting Florida native to play wide receiver at the University of Alabama.

Alabama fans fell in love with Amari Cooper, Calvin Ridley, and Jerry Jeudy. Two of the three won the Fred Biletnikoff Award (nation’s best receiver), and all won national championships. Cooper, Ridley, and Jeudy each totaled 1,000+ yards receiving at least once during their time in Tuscaloosa, Ala. Brooks can excel like the trio above. He brings the size of a marquee outside receiver (6-2/196) and runs smooth routes. Several of his teammates, including Bryce Young, praised him for his routes and attention to detail in 2021. As a freshman, Brooks stepped up in one of the biggest rivalry matchups in college football.

Alabama trailed 3-10 versus Auburn in the Iron Bowl. The Crimson Tide had a chance at one final drive in the fourth quarter.

Brooks caught two passes on the 97-yard drive, including a 28-yard, game-tying touchdown. It was reminiscent of DeVonta Smith’s game-winning touchdown in 2017 against Mississippi State. Brooks pushed the contest into overtime, and Alabama captured a 24-22 victory at Jordan-Hare Stadium. His playmaking abilities showed up again versus Cincinnati in the Goodyear Cotton Bowl. He led all receivers with four catches for 66 yards, including a 44-yard touchdown reception. Brooks finished 2021 with 15 catches for 192 yards and two touchdowns. He was huge on special teams, blocking a punt against Texas A&M for a touchdown. Jameson Williams and John Metchie took Brooks under their wings and taught him how to succeed at Alabama.

He appreciates both for their wisdom as he’s now a leader in the receiver room. Coach Saban loves everything Brooks brings to the team, but the sophomore needs more game reps at receiver. He did not practice in the spring because of an injury, but fans know what Brooks can do. The Tide brought in two transfers, Jermaine Burton and Tyler Harrell, but one of its South Florida guys is pushing to be a starter. Brooks showed Bryce Young he can trust him, and we should look for more of that in the fall.