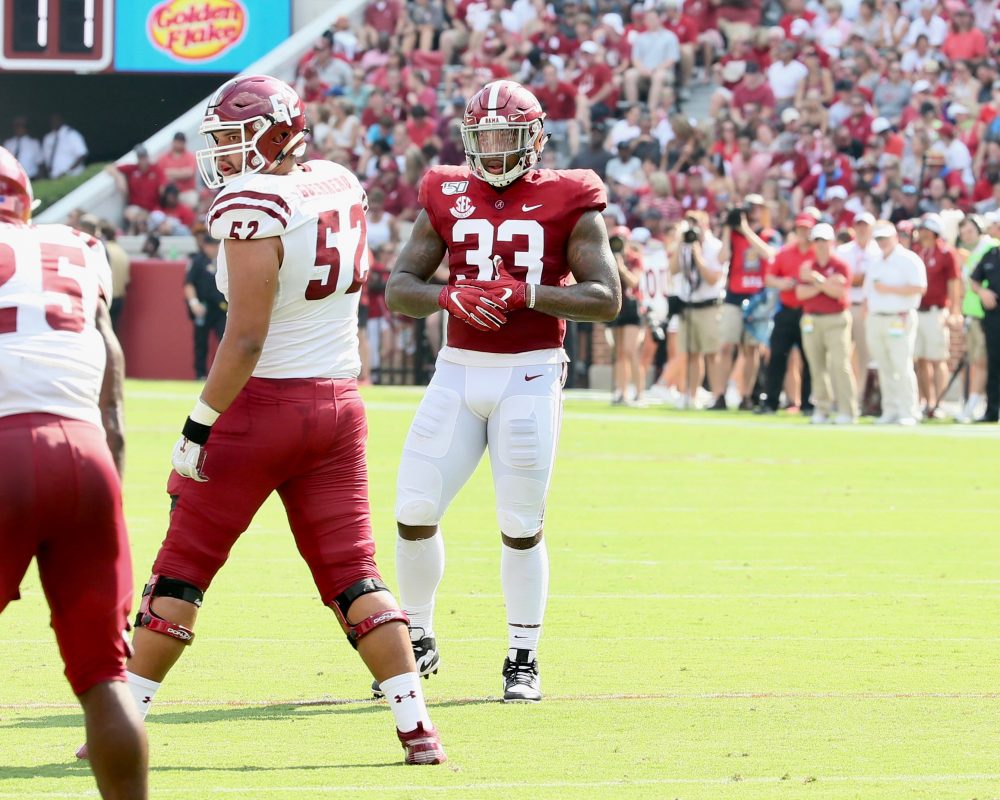 Prior to Nick Saban delivering a preview on South Carolina, Alabama’s coaching staff elected six players of the week after the team’s victory over New Mexico State.

Despite an inability to establish a consistent run game, the Crimson Tide posted 62 points, 603 yards offensively, converted seven of 14 third downs and made a bunch of explosive plays.

The duo of Jerry Jeudy and DeVonta Smith at receiver were honored on offense.

Jeudy led Alabama in receiving for a second straight week and according to Henry Ruggs III, he is playing on a different level. The native Floridian totaled 103 yards receiving on eight catches and totaled a career-high three touchdowns. He now has seven 100-yard performances in his career and he moved to second all-time in school history for career touchdowns with 20.

Smith posted five catches for 47 yards, with a long reception of 22 yards.

The Louisiana native had three of his five catches result in first downs for Crimson Tide and chimes in with five receptions in each of the first two games. He stands second on the team in receiving with 10 catches for 101 yards.

A trio of Trevon Diggs, Anfernee Jennings and Xavier McKinney were honorees on defense from the coaching staff.

Jennings collected three total tackles, one sack and two quarterback pressures, to earn recognition for a second consecutive week. His efforts held the Aggies to 101 yards rushing on 33 carries (3.1 yards/carry).

Jennings and the Tide’s defensive front did not allow a rushing touchdown.

McKinney tied for the team lead in tackles (six) and now leads it with 14 stops after two matchups. He also added a quarterback pressure that was part of eight total for Alabama throughout the game. The junior safety recovered a fumble and assisted a defense that forced three turnovers. McKinney captained a group that surrendered just 262 yards to the Aggies.

Will Reichard was named by the coaches on special teams.

The true freshman kicker bounced back against New Mexico State.

He drilled a pair of 40+ yard field goals and scored 14 of Alabama’s 62 points inside Bryant-Denny Stadium for the team’s home opener. Reichard was perfect on all eight of his PATs and only one of his 10 kickoffs (nine touchbacks) were returned as he totaled 647 yards.