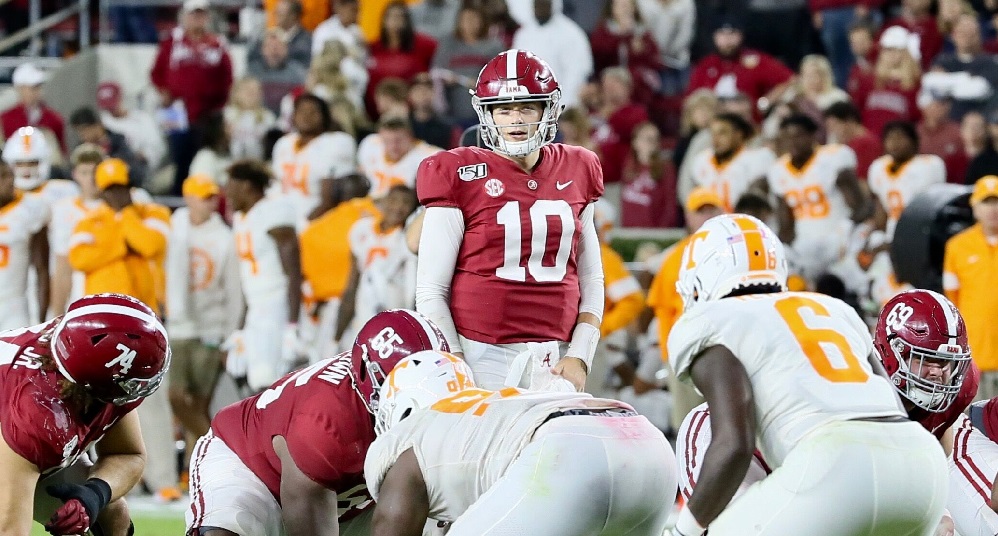 Here’s an article that shows you what you may expect to see Saturday when Alabama lets loose the “Mac Attack” on Arkansas. See if you agree with this analysis

Mac Jones, Alabama’s backup quarterback has been around long enough to know the whole playbook. Offensive coordinator and quarterback coach Steve Sarkisian isn’t in panic mode trying to build a game plan on offense that he can understand. He understands it all. What they’re doing is building a portfolio of plays that Jones is comfortable running, plays that fit in his wheelhouse. They’re not trying to recreate Tua Tagovailoa 2.0, they’re trying to polish Mac Jones 1.0.

Jones has the arm strength needed to throw the deep out route and the deep post or bomb if you will. He has all the mechanics of a great quarterback already in his body. What they are working on is what separates quarterbacks with talent to those who win consistently.

What they are working on is his ability to make good reads and get rid of the ball quickly, to put the ball in the play maker’s hands and let them do the rest. You could almost say they’re going back to Greg McElroy days and are instructing him to be a “game manager”. Take what they give you, don’t take sacks, throw the ball away and live to fight another play if things aren’t there.

But if you think this is going to be a run fest, think again. When it’s all over, many may be surprised to see the run / pass ratio hasn’t changed all that much from the games that Tua was quarterbacking. When Saban says he trusts Jones, that doesn’t mean he trusts him to try hard, it means he trusts Jones to air it out and not make mistakes. And his throws won’t be all bubble screens and short crossing routes, Saban trusts Jones to go deep and Alabama will show Arkansas and the rest of the world Saturday that not only does Saban have faith in Jones, but so do his receivers.

Following the A Day game in Tuscaloosa, where Jones out preformed every quarterback on the Tide staff going 19 for 23, for 271 yards and 2 TDs with 1 INT, receivers all praised Jones timing and instincts, hitting them in stride and making great choices.

Alabama receiver Henry Ruggs III told the press following the Tennessee game that everyone has faith in Jones and that things should run as usual. So what does “usual” mean when devising an offensive game plan?

Well the Hog defense has been giving up an average of 220 yards a game passing and about 193 yards a game rushing. In total, they’re giving up an average of 413 yards a game of offense. So what this tells the game planners is that they’re equally soft in rushing and passing and that means their plan will not focus on one predominantly over the other in terms of rushing and passing. What may change from Tua running the offense to Jones is simple. Jones just hasn’t had the first team snaps enough to be as good in instantly seeing advantages in the RPO, (run, pass option) type plays. So fewer RPO’s may be run, but Jones is very adept at seeing match ups and very comfortable changing the play at the line of scrimmage to take advantage of them and the coaches are comfortable with him doing this.

Jones is not a Jalen Hurts type of running quarterback, but he moves comfortably in the pocket and can stretch time waiting for receivers to clear with his feet. As we said earlier, he is smart and has good pocket presence. Dan Enos praised him on his ability to know when to take just one step forward in the pocket to evade a rusher and quickly get rid of the ball. Unless someone completely misses a rusher, Jones doesn’t take a lot of sacks. He can roll out and throw on the run and he can make short yardage out of a pass pass protection play gone bad. However, Jones is going to be instructed to play it safe, take the slide, not run into the defense and try and shoulder out a first down on his own, to live to play another play.

Last week Jones was pushed into a game and told to protect the ball, run the clock, protect the lead and don’t take chances. It didn’t really show a lot of his capabilities. This week it will be interesting watching Jones build a lead and then it will be more interesting to see if coaches make him take his foot off the gas and protect a lead, or let him continue playing up to his capabilities. That’s really the only unknown in this week’s offensive game plan. The other may be if Alabama builds a lead if they’ll let Tua’s brother Taulia have some playing time.

After this game, fans will know if they breath safely or not should Tua’s recover time be longer than initially anticipated and for that reason, Saturday’s game is almost a must see game now where it wouldn’t have been had Tua not gotten hurt.

So Saturday, most of America will be tuned in to see a “Tualess” Tide and see what kind of damage the “Mac Attack” can inflict on an SEC team. Personally, I think things will be just fine.

Alabama’s Tua Tagovailoa injury with in depth medical explanation
Alabama fans: Stop the negativity and rally behind Mac Jones
To Top
%d bloggers like this: