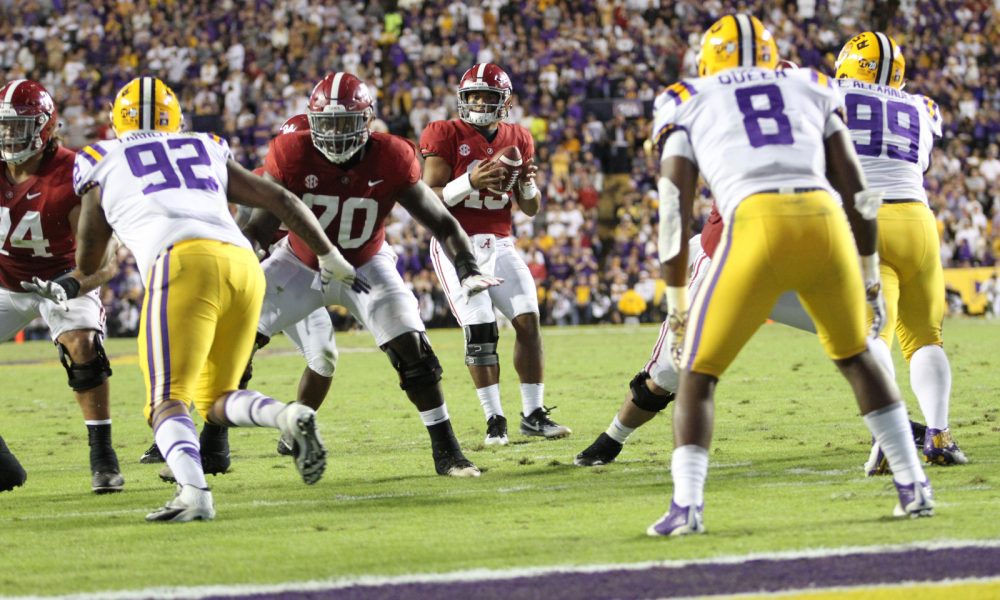 The most important player is quarterback, Tua Tagovailoa.

For two weeks, all he has heard is how Joe Burrow of LSU is better than him when it comes to the Heisman and being the No. 1 signal caller for the 2020 NFL Draft. Tua Tagovailoa is removed from the tightrope surgery and has been out of the walking boot for a while.

RELATED: Alex Leatherwood, No. 2 impact player for Alabama versus LSU

Despite the success Burrow’s had, he will be in Tagovailoa’s arena and the native Hawaiian is poised to put on a big show. After not playing against Arkansas, he went through a tough rehab yet it has him prepared for the showdown. Throughout practice, the junior proved he could maneuver around on his right leg. He sported a black sleeve on it, but it didn’t give him any problems.

He may not be 100 percent, but he looks good to go and Nick Saban referred to Tagovailoa as someone with a ‘warrior’s mentality.’ A strong effort must come from his offensive line, but should he be able to move within the pocket and deliver passes on time – no major issues will happen.

He will have to be aware on certain plays, seeing how the Tigers look to attack his lower extremities.

The former five-star has 27 touchdown passes to two interceptions and Saturday will be his moment to show everyone that he is the best quarterback in college football. Alabama expects balance on offense, but there will be a point where Tagovailoa has to take over.

Much of national media believes that LSU will win, regardless of whether he plays or not.

The 2018 runner-up to the Heisman has the world in his left hand and he’s about to own it.

Top 5 most impactful players for UA versus LSU

Former Alabama RB Shaun Alexander has a message for Najee Harris
Mark Ingram says Alabama owns LSU and stop hyping them up
To Top
%d bloggers like this: