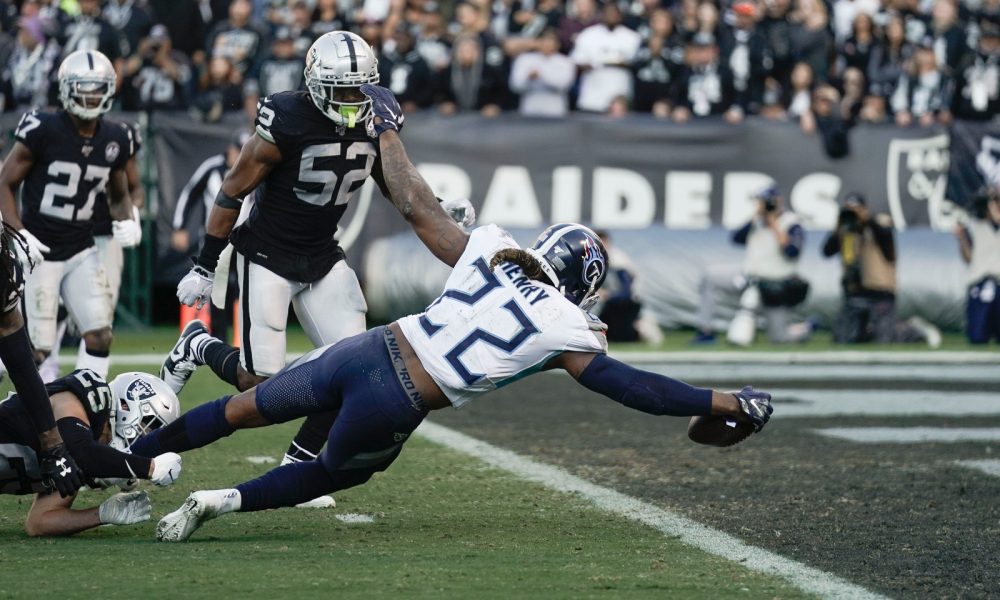 No defense wants any part of Derrick Henry.

He may be the biggest running back in the National Football League, but it does not mean he is not athletic.

The 6-foot-3, 247-pounder packs a stiff arm, juke moves and speed for days as he continues to carry the playoff hopes of the Tennessee Titans on his shoulders. He collected his fifth 100-yard outing on Sunday versus the Oakland Raiders in a 42-21 win for the Titans.

Henry pounded the Raiders for 103 yards on 18 carries with two touchdowns, to a tune of 5.7 yards per rush.

He had a long run of 24 yards, while five of his 18 attempts went for either first downs or scores. After having two 100-yard performances in the month of November, Henry is starting this month with a bang and currently sits as one of the best backs in the league.

RELATED: No one can stop Derrick Henry as he keeps the Titans playoff hopes alive

He’s in the top-five for carries (250), rushing yards (1,243) and touchdowns (13), while his average of yards per carry (4.9) has him in the top-10. Despite a few NFL Draft analysts believing his style would not translate to the professional game, Henry now has back-to-back 1,000-yard rushing seasons. He has the Titans on a four-game winning streak and with an 8-5 record.

The franchise stands at No. 7, in terms of the AFC playoffs, and needs Pittsburgh (8-5) to lose a game.

Although the Steelers have Baltimore to tango with, the Titans have two more meetings against Houston and a date with the Saints.

He carried Alabama to a College Football Playoff National Championship in 2015, so Henry is highly capable of delivering the Titans to a postseason berth.