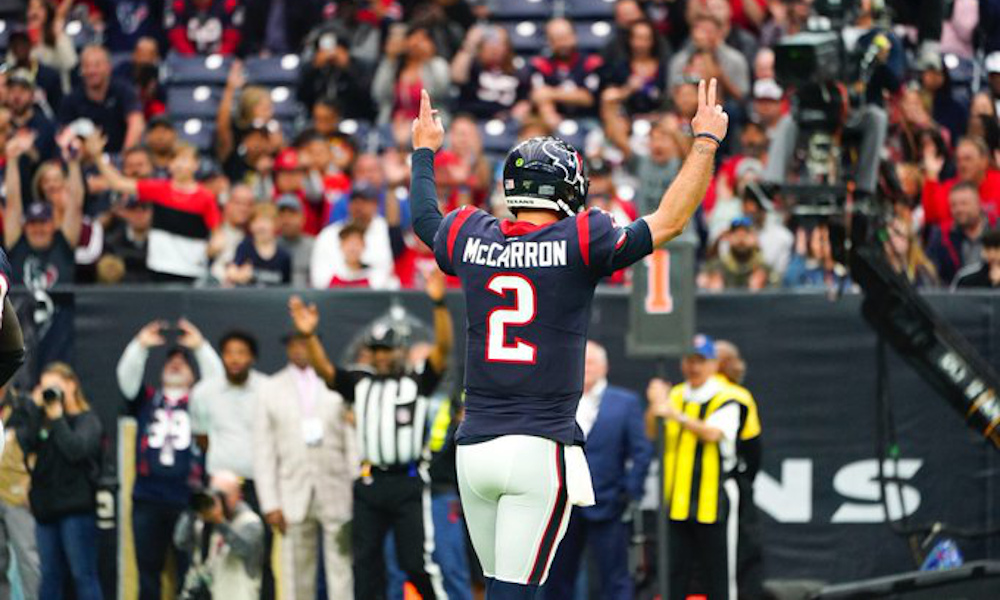 Despite the Titans and Cardinals choosing to tag both Derrick Henry and Kenyan Drake, a trio of former University of Alabama standouts inked contracts on Monday.

Amari Cooper remains a Dallas Cowboy with a $100 million deal, while AJ McCarron stays with the Houston Texans and Jarran Reed returns to the Seattle Seahawks.

According to Tom Pelissero of NFL.com, McCarron re-signed with the Texans on a one-year, $4 million contract.

The #Texans re-signed backup QB AJ McCarron to a one-year, $4 million deal, of which $3.75M is fully guaranteed.

The deal is good for $3.75 million fully guaranteed, as he will back up Deshaun Watson for the 2020 season. McCarron took to Twitter to his express his excitement about remaining with the team. He enters his seventh NFL season – drafted in the fifth-round of 2014 – and after playing with the Bengals and Raiders, the former Crimson Tide quarterback likes it in Houston.

McCarron was a three-time BCS National Champion at Alabama (2009, 2011-12) and earned multiple awards in 2013 – including Maxwell and Johnny Unitas Golden Arm honors.

He was also named first-team All-American.

For Reed, he’s become a leader on the defensive line for the Seahawks.

In a tweet from Tom Pelissero, Seattle agreed to bring back Reed on a two-year contract worth $23 million. A native of North Carolina, he came to Alabama in 2014 after two seasons at East Mississippi Community College.

Reed would account for 111 tackles in two years with the Tide – including 11 stops for loss, eight quarterback hurries and seven breakups.

The 6-foot-3, 306-pounder assisted the team to two Southeastern Conference Championships (2014-15) and a College Football Playoff National Championship in the 2015 season.

Both McCarron and Reed are looking to do big things in the fall.