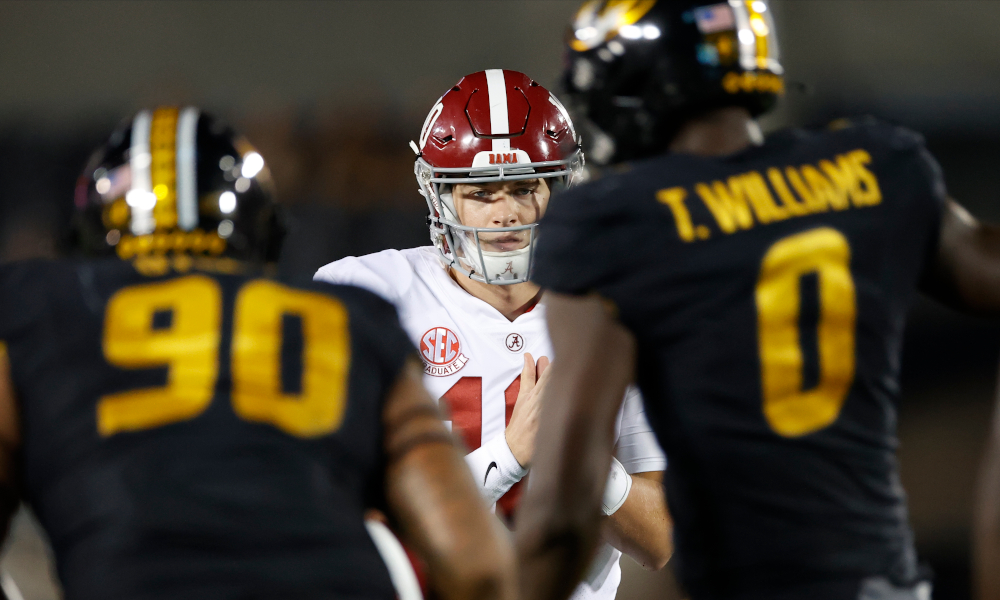 After last week, no one questions if Mac Jones is the right guy at quarterback for Alabama football.

He proved himself versus Missouri on the road with an efficient performance. Jones paced the Crimson Tide to a 38-19 win and he completed 75 percent of his passes in doing so.

The redshirt junior connected on 18 of 24 attempts for 249 yards with two touchdowns and no turnovers. Both of his scoring tosses went to Jaylen Waddle on third down and he anchored the Tide to converting nine of 14 third downs.

Despite his six incompletions, each pass was on target and Jones was accurate with the ball.

He had a lot of fun and his team is proud of him; nevertheless, there is more work to be done.

Jones and Alabama will host Texas A&M on Saturday for its home opener at Bryant-Denny Stadium. Prior to the matchup, the former four-star graded out with the highest total quarterback rating in the nation.

According to ESPN, Jones carries a total QBR of 95.2.

He dropped dimes under pressure against the Tigers, and the Tide looks for him to continue this weekend.

While the likes of Waddle and Nick Saban praised Jones for his toughness, Jordan Battle said the quarterback’s running ability is preparing the defense for Kellen Mond and the Aggies.

As a first-year starter at safety, Battle refers to Jones as a ‘dual threat.’ Bryce Young is helping the team too, but Battle sees Jones as someone who can move and get the ball out quickly.

Even with a reduced capacity of fans, it will be interesting to see how Jones attacks the secondary of Texas A&M.