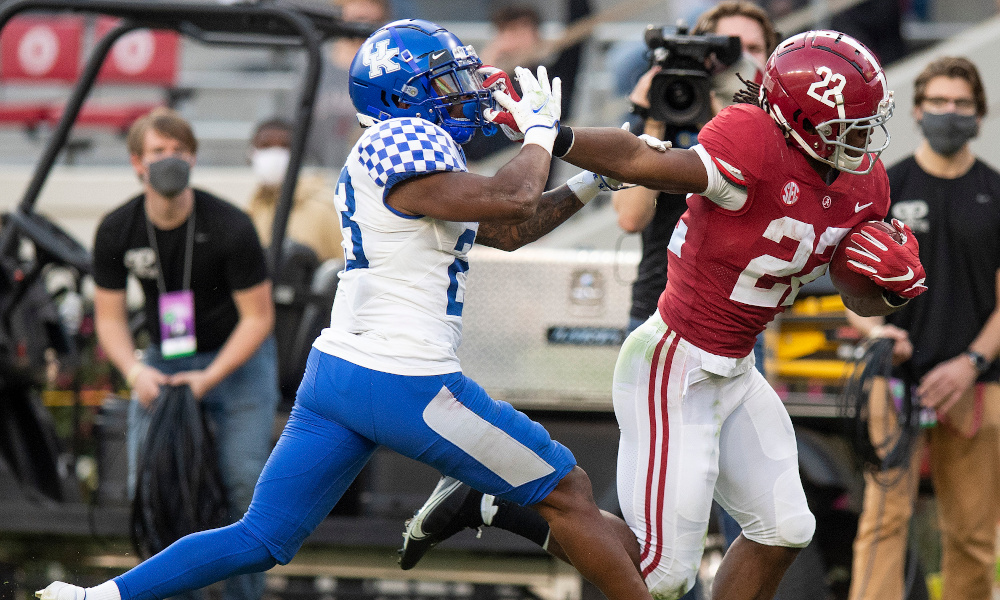 Rumors may have Steve Sarkisian as a candidate to take the head coaching vacancy at South Carolina, but Nick Saban and Alabama football need to hang on to the talented offensive coordinator.

He has instituted balance all season and last week, the offensive line and running backs for the Crimson Tide hit its stride versus the Kentucky Wildcats at Bryant-Denny Stadium. Since making a decision to return for his senior year in the offseason, Najee Harris has improved his draft value and is advancing up the all-time list for running backs in school history.

Coach Saban wanted to get a couple of freshmen an opportunity in the backfield; however, Harris was able to total his sixth 100-yard performance from scrimmage in a 63-3 win over Kentucky.

The ONLY player in @AlabamaFTBL history with 16 rush TDs through seven games:

After not recording a rushing touchdown of 20-plus yards before this season, his training with Brad Lester (former Auburn running back) and Derrick Blaylock has led to three scores of 20+ yards. Harris now carries elite speed to add with his power, contact balance, vision, hurdling and stiff arm. The 6-foot-2, 230-pounder collected 83 yards rushing and two touchdowns on 13 carries — including a 42-yard burst to the end zone in the second quarter. Harris gave Alabama a 21-3 lead with his efforts and averaged 6.4 yards per carry. He also caught two passes for 27 yards, with a long reception of 24 yards.

Even with his outing, the excellence of the Tide’s offensive front did not stop with him.

Kyle Flood, Alabama’s offensive line coach, saw his group create scoring opportunities for Brian Robinson, Jase McClellan and Roydell Williams too against the Wildcats. All three backs totaled at least one touchdown, while McClellan led the team in rushing with 99 yards on 10 carries. A native of Aledo, Texas, he averaged 9.9 yards per rush and had a long run of 23 yards.

McClellan added the final punctuation mark to the Crimson Tide’s victory with a 19-yard score in the fourth quarter.

Overall, Alabama’s backs tallied 226 yards rushing with five touchdowns on 40 carries. The rushing attack helped the Tide convert six of nine attempts on third down, and average 7.7 yards per play. In reflecting on Harris, the former five-star now has 36 career rushing scores — moving him over Trent Richardson (2009-11) for fifth all-time in school history among backs.

Alabama will tangle with its in-state rival this week, as Auburn comes to town for the Iron Bowl.