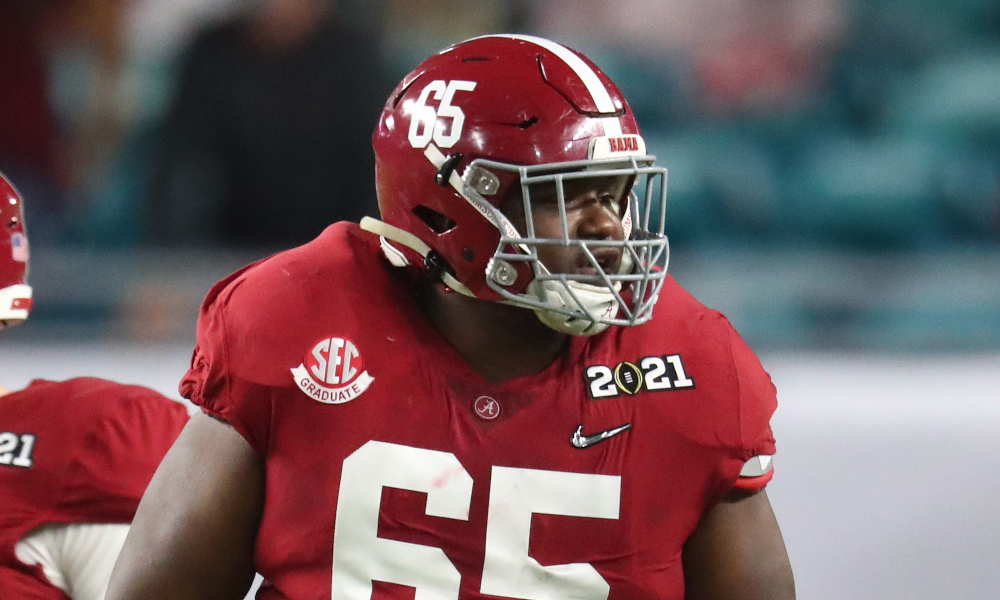 If one wants to know why Ohio State could not generate a lot of pressure to Mac Jones of Alabama in the College Football Playoff National Championship Game, look no further than the player at left guard for the Crimson Tide.

Deonte Brown, a native of Decatur, Ala., started all 13 games for the Tide in 2020 and earned first-team All-SEC honors from the league’s coaches. Despite committing four penalties and allowing five quarterback pressures, the former four-star gave up just half a sack in 843 snaps.

Brown missed only two assignments in helping Alabama’s offensive unit win the Joe Moore Award and the team capture a national championship. It was difficult for the Tide’s competition to get around him during the season; however, Saturday’s exhibition in Mobile (Ala.) is going to be a challenge for whomever lines up against Brown at the Senior Bowl.

After playing at 350 pounds at Alabama, Brown clocked in at a mammoth-sized, 364 pounds at Senior Bowl weigh-ins.

In adding 14 pounds, the question will be can he generate enough quickness upon the snap of ball? If he is able to smoothly maneuver, bend and block at the first and second level, then the added weight won’t serve as a problem. With the NFL Draft pundits keeping eyes on Trey Smith of Tennessee, it will give Brown a chance to prove he’s a concrete second-round value.

As of now, he sits between a late second to early third-rounder.

Brown carries a huge wingspan of 80 6/8″ and played in 48 career games at Alabama.

He will be blocking for Mac Jones once more, as both players are on the American team.

Brown is one of the best interior offensive linemen in the draft class, and he will be set to do his thing at 1:30 p.m. CT this weekend on NFL Network.