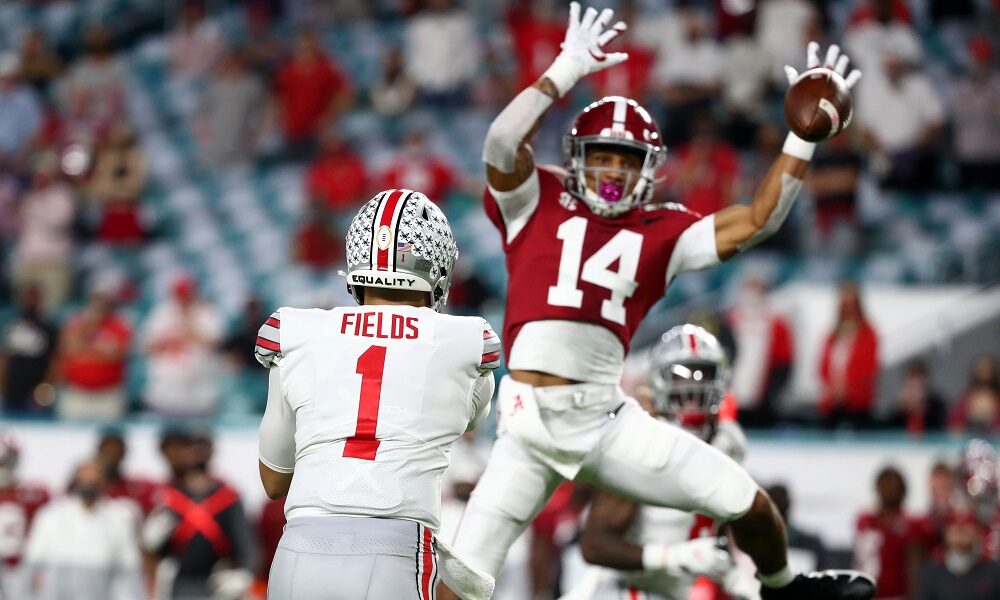 After Tuesday’s practice, Nick Saban spoke on the progression of players at cornerback for Alabama football.

He is excited to watch names such as Josh Jobe, Jalyn Armour-Davis, Marcus Banks, and Ga’Quincy McKinstry perform with efficiency on Friday in the Crimson Tide’s first scrimmage of spring practice. As the Tide looks for someone to replace Patrick Surtain II, Brian Branch enters his sophomore year as an “X factor” in the defensive secondary. Malachi Moore is limited with an injury and Branch is taking reps as the starter in nickel. According to respectable sources, he is doing well and it will be difficult for the coaching staff to not have Branch starting in the fall. He was recruited to play safety; however, his size (6-0/190) and skill set fits Alabama at safety, nickel, dime, and cornerback. Branch, a native of Tyrone, Ga., graduated from Sandy Creek High School as the program’s all-time leader for career interceptions. He showed those elite ball skills in 2020 as a true freshman.

Branch stood out in fall camp and played in 12 games — including three starts — last season.

His seven pass breakups were good for third on the roster, behind Surtain and Jobe. He also recorded two interceptions, both coming against Southeastern Conference opponents. Branch was tied for third in the SEC among all freshman defenders in passes defended in 2020. If he excels throughout spring as the starter at nickel, where does it place Branch in the rotation?

Moore, who led the Tide for interceptions (three) last year, will be back for preseason camp.

He excelled as a freshman and will have his job back.

Jobe’s experience at cornerback should have him as one of two starters at the position. Jordan Battle and DeMarcco Hellams are in line to have both safety positions. Branch was the starter in Alabama’s dime defense last season, but it plays more nickel than dime. During his three starts, Branch secured 14 tackles and six breakups versus Mississippi State, Notre Dame, and Ohio State. He had three pass breakups (season-high) against the Buckeyes in the Tide’s 52-24 victory in the College Football Playoff National Championship Game. Alabama fans want to see Branch as a starter in the defensive backfield.

With all the talent the Tide has, where does Branch fit best at? Coach Saban will have it figured out in the fall.

Branch is looking forward to having a dominant performance in the first scrimmage.