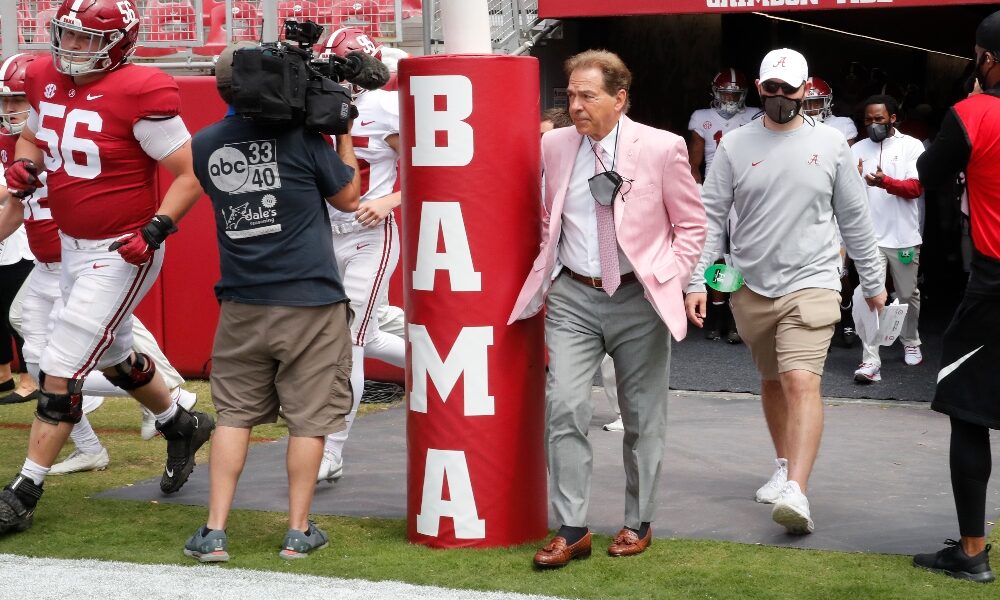 Nick Saban is excited about a lot of things.

As the head coach of the University of Alabama football program, he was thrilled to have 10 players selected in the NFL Draft.

RELATED: Nick Saban has retired from his noon-time basketball league

He was pleased to win a Southeastern Conference title in 2020 and was proud to have a second undefeated Crimson Tide team that captured a national championship. Coach Saban is ready to host recruits again this summer, but he is the most excited about the players he has for the coming fall. He lost athletes of great leadership to the pros, and Saban expressed it on Tuesday during a special edition broadcast of “Hey Coach” for donors and ticket-holders.

The first thing he addressed is the need for young players to emerge and take on leadership roles.

While he returns a lot on defense, Saban is locating quality guys on offense for roles.

“We’re going to have a lot younger team in a lot of ways, but a very talented team that will need your support,” Saban said to ticket-holders and donors. “But we’re excited about all of those challenges [of player development] and we’re excited about the team that we have. A lot of new faces, a lot of young players that I think have a lot of potential and how they develop will determine how we do, especially early on.”

The youth starts upfront, as Alabama must replace three veterans on its offensive line.

It graduated Landon Dickerson, Alex Leatherwood, and Deonte Brown to the National Football League. The Crimson Tide also has a new frontman running the offense in Bryce Young.

A sophomore from California, the former five-star was the Dixie Howell Most Valuable Player of the spring game.

Alabama lost DeVonta Smith and Jaylen Waddle at wide receiver. John Metchie returns with playmaking abilities, but names such as Slade Bolden, Xavier Williams, Traeshon Holden, and Javon Baker must step up. The Tide also signed a very talented freshman class at the position too.

RELATED: Eddie Lacy responds to whether he would make a NFL comeback like Tim Tebow

“We know we lost a lot of really good players to the draft but a lot of characters that goes along with that, and leadership,” Saban said. “That all has to be replaced by somebody who played last year who really didn’t have to assume that role. So roles change, players change, responsibilities change. And it’s always a challenge to see how you can bring that together and get a team to sort of be the best that they can be so they can have a chance to compete for an SEC championship, and get in the playoff and have a chance to compete for a national championship.”

He has a new task, but Saban is one of the best at handling difficult things.

ESPN’s Mark Schlabach has already motivated Alabama. In his Way Too Early Top 25 projections after spring football, he has Oklahoma ahead of Alabama in his top-10. Schlabach has the Sooners at No. 1 and the Tide at No. 2.

Saban is looking to make sure the 2021 group follows suit.