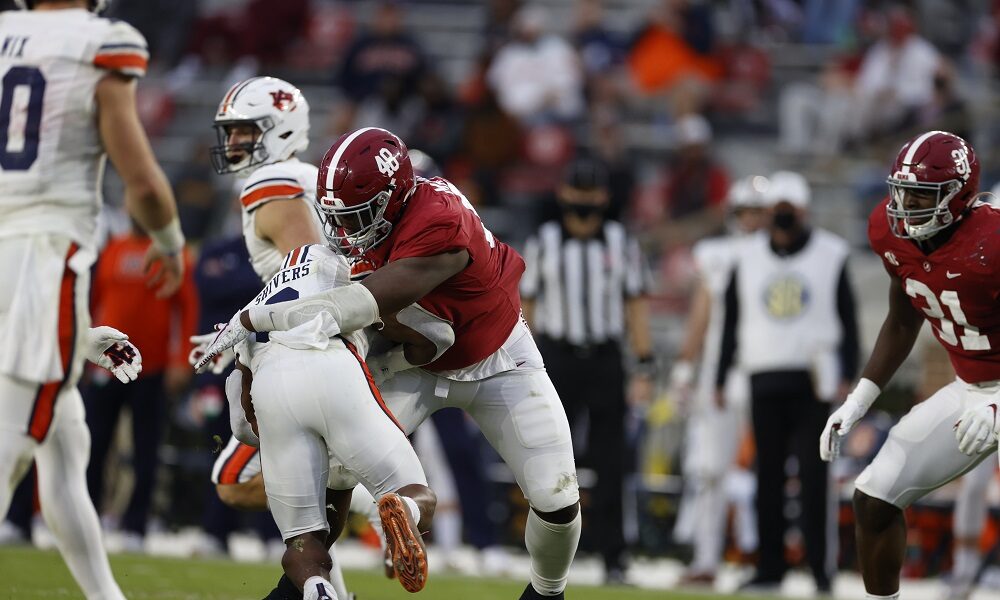 After having a perfect season in 2020, Alabama football will start its journey to repeat as national champions.

Regardless of having leadership depart to the National Football League, a new group of seniors is excited to anchor the program to back-to-back national titles for the first time since 2011-12.

Nick Saban wants to see how this year’s bunch comes together, as he is prepared to seek the eighth championship of his coaching tenure.

Despite NIL marketing and endorsements happening, Alabama players remain focused on the coming fall. Listed below are the top five most important seniors for this campaign.

Chris Owens starts the protection of Bryce Young and the development of the rushing attack.

He replaces Landon Dickerson as the Crimson Tide’s starting center. Owens saw 210 total snaps last year and filled in for Dickerson after an injury versus Florida in the Southeastern Conference title game. He earned three starts, including two in the College Football Playoff against Notre Dame and Ohio State.

The 6-foot-3, 315-pounder must set the tone for physicality and bring the offensive line together.

Owens is an effective communicator, but his game has to elevate for the Tide to win a title.

Brian Robinson has received many opportunities at running back. He has waited behind names such as Damien Harris, Bo Scarbrough, Josh Jacobs, and Najee Harris, but the Tuscaloosa native has been productive. His statistics have improved each season, and he totaled a career-high six rushing touchdowns in 2020.

Robinson played well in the CFP National Championship matchup against the Buckeyes, totaling 69 yards rushing on 10 carries. He has the capability to be No. 1 in Alabama’s rotation; however, can Robinson fend off Jase McClellan?

The sophomore from Texas is explosive and is gunning for the starting job.

No one outworked Robinson in the spring.

He has come into his own as a leader, and he wants a strong draft stock. This is his opportunity to prove he can do it all at the position.

He may have been a day two pick for this year’s NFL Draft, but Christopher Allen returned to Alabama.

The senior will be one of the forces behind a defense that expects to be elite. Allen is back for his fifth season after leading all SEC defenders in tackles for loss (13) in 2020. He also had six sacks, five quarterback hurries, and two forced fumbles. Allen was awarded second-team All-SEC by the league’s coaches and is coming after more. The combination of him and Will Anderson should be a nightmare for offenses.

Both have a chance to be this year’s version of Ryan Anderson and Tim Williams.

Alabama has a deep rotation on its defensive line, but it starts with Phidarian Mathis.

He is a two-time national champion; however, he steps into a huge leadership role. The departure of Christian Barmore means Mathis is the tone-setter upfront. LaBryan Ray, another senior, is back, but he has struggled to stay healthy for the Tide.

RELATED: DeMarcco Hellams getting set for a big season at Alabama

Mathis turned in 31 tackles, five tackles for loss, 1.5 sacks, three pass breakups, three quarterback hurries, and one forced fumble last season. He would have a been a day three pick in the NFL Draft; nevertheless, he can improve his value in the fall.

Josh Jobe is the lone senior in the Alabama defensive secondary.

The Crimson Tide has a group that can be dominant, but it depends on Jobe’s performance.

He put together solid outings in 2020, recording 55 tackles (2.5 for loss), two sacks, 11 breakups, two forced fumbles, and one quarterback pressure.

He is a preseason candidate for the Lott IMPACT Trophy and a second-teamer for Walter Camp’s Preseason All-American Team.

Jobe has the capabilities to have an outstanding season; however, it comes down to trusting his technique. Names such as Jordan Battle, Malachi Moore, and DeMarcco Hellams are ready, but this unit will go as Jobe goes.

It is a marquee moment for him.