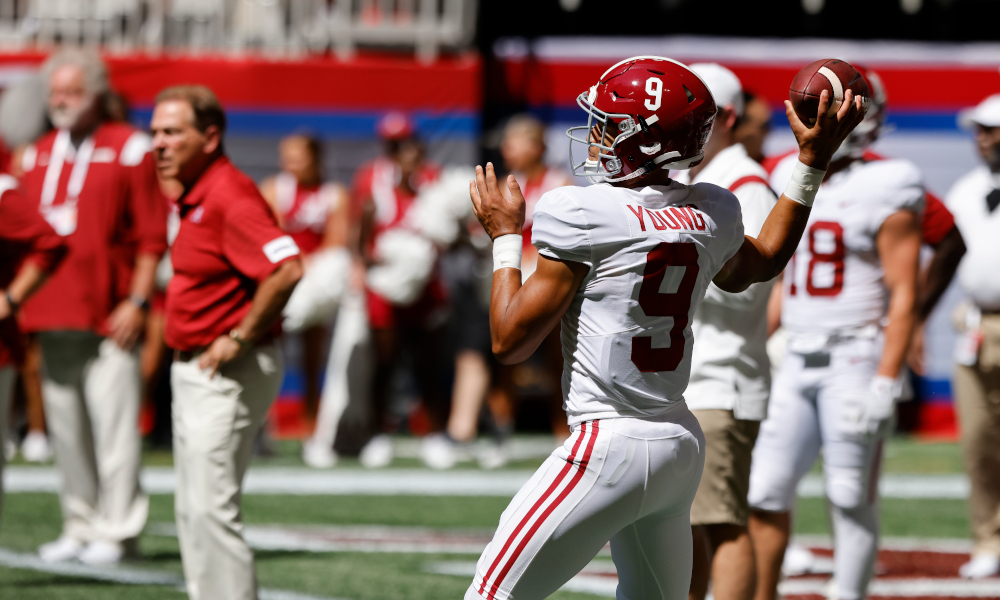 Bryce Young stunned the college football world and some Alabama fans with his performance against Miami.

As a first-year starting quarterback, his debut at Mercedes-Benz Stadium was dominant.

He completed 27 of 38 passes (71 percent) for 344 yards with four touchdowns and no turnovers. Two of his scoring passes went to Cameron Latu, while John Metchie and Jameson Williams caught a touchdown pass.

The sophomore had a better starting debut than Mac Jones, Jalen Hurts, and Tua Tagovailoa.

Fifteen of his 27 completions went for first downs or touchdowns. Young played with confidence and was not bothered with pressure in his face. Three of his scores came against the blitz, and he guided the Crimson Tide to 44 points, five touchdown drives, and 501 yards. The 6-foot, 194-pounder was one of seven players of the week via Alabama’s coaching staff and the Southeastern Conference’s Offensive Player of the Week.

On Tuesday, he made the Davey O’Brien “Great 8” list.

Presenting the QBs who make up the @DaveyOBrien Great 8 list in week one. Any player named to the Great 8 this year becomes a member of the Midseason Watch List and is eligible to be named the Davey O’Brien National Quarterback of the Year!

Mac Jones was the first Tide signal-caller to win the award in 2020. Young has an opportunity to capture it this year.