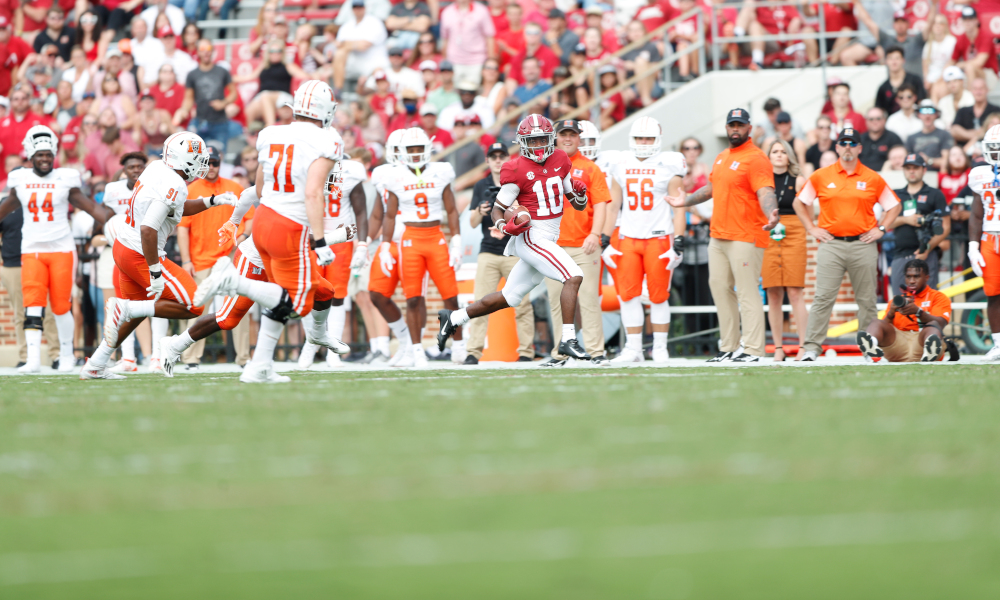 One quality sets Alabama football apart from the rest in being “Wide Receiver University.”

Whether it was Julio Jones, Amari Cooper, Calvin Ridley, Jerry Jeudy, Henry Ruggs III, DeVonta Smith, or Jaylen Waddle, each one possessed the same trait as a freshman. The Crimson Tide had playmakers that carried a professional mindset. Jones started the trend, but players after him kept the baton of performing higher than their classification. Cooper was a 1,000-yard target during his freshman season in 2012. Ridley impressed teammates in the summer of 2015 with his routes and also became a 1,000-yard weapon. The trio of Jeudy, Ruggs, and Smith found ways to make highlight efforts as freshmen in 2017.

Waddle was the Freshman of the Year for the Southeastern Conference in 2018.

Now, Tide fans are being introduced to JoJo Earle. He arrived on the University of Alabama campus in the summer and quickly captivated attention from coaches and players. A native of Aledo, Texas, he flipped from Louisiana State University to Alabama during the early signing period. People went to social media to watch his high school highlight tape and were amazed by him.

The 5-foot-10, 170-pounder has Waddle’s height and a special skill set. He’s totaled nine catches for 110 receiving yards in two matchups, including a team-high seven receptions for 85 yards versus Mercer. Earle got opportunities to return punts last week and averaged 23 yards per return. Nick Saban said the four-star is ‘Waddle-like,’ but Bryce Young sees his ‘professional’ mindset.

On Monday, Young said he knew Earle was special from the moment he arrived.

“You can always tell how someone attacks the time away before we start practicing,” Young said. “He came in with good knowledge of the playbook, and you could tell he was studying. That is something that caught all of our attention. When we started practicing, he was making plays. He looks really good. JoJo is somebody that we are really excited to watch develop.”

He can be a dangerous weapon anywhere on the field. Saban and the Tide are starting to see it. If he could have gotten a block on one of his punt returns, Earle would have scored. He possesses the capability to score whenever the ball is in his hands.

The freshman could be in for a marquee moment against Florida.