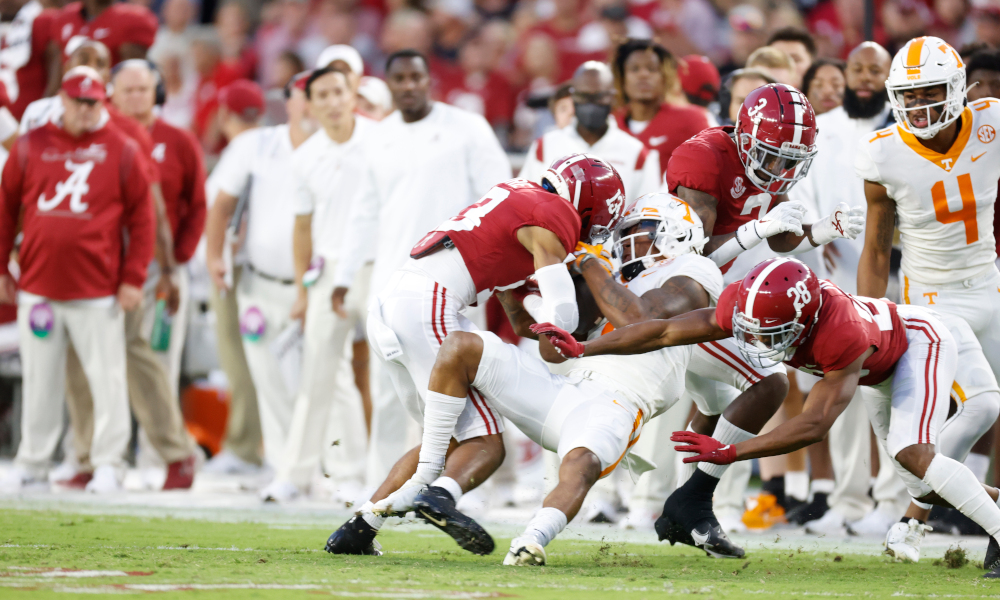 If anyone would know the issues with Alabama’s defensive secondary, it is George Teague.

Teague was a legendary safety for the Crimson Tide under Coach Stallings. He ended his career with 14 interceptions and was always in the position to make plays. Teague was an anchor on the 1992 defense that won a national championship, allowing Miami to score 13 points in the 1993 Sugar Bowl. He was also an All-SEC selection and second-team All-American in 1992.

Teague played on five NFL teams, including two stints with the Cowboys, during his nine-year career. He detailed the Crimson Tide’s defensive problem via Twitter. Teague said the players are in a ‘complex’ defense.

The #Bama defense is more complex than you think! If you like what I’m saying retweet it for me. I might try to get some work as an analyst on one of these AM radio stations. Let’s go! #RollTide #DallasCowboys #nflalumni #BuiltByBama #TeaguesTake pic.twitter.com/y87HaFLb8J

“When we are seeing mistakes happen, we do need to keep in account that we have these young guys learning a prostyle type of secondary,” Teague said.

Communication and proper alignment are things he highlighted in facing different offensive schemes.

“The safety and corner have to work together,” Teague said. “The safety and the nickel have to work together. The corner and the nickel have to work together. It could be some linebackers involved in that so it gets very complex. One breakdown leads to big-play capabilities. The alignment has a lot to do with because it all has to look the same. You can’t give it away. If you line up inside the receiver one time and outside the receiver another time, they are smart enough to figure it out on the other team. So you have to line up outside of that receiver — if that’s the base lineup — all the time. It puts guys in bad positions sometimes. It’s complex guys; it is not as simple as we think.”

Teague was referring to when teams have a stack (two) or trips (three) of wide receivers to one side. Alabama fans have seen the secondary get burned with this at times.

The Tide is off this week, and hopefully, its defense can improve in areas needed to show consistency.