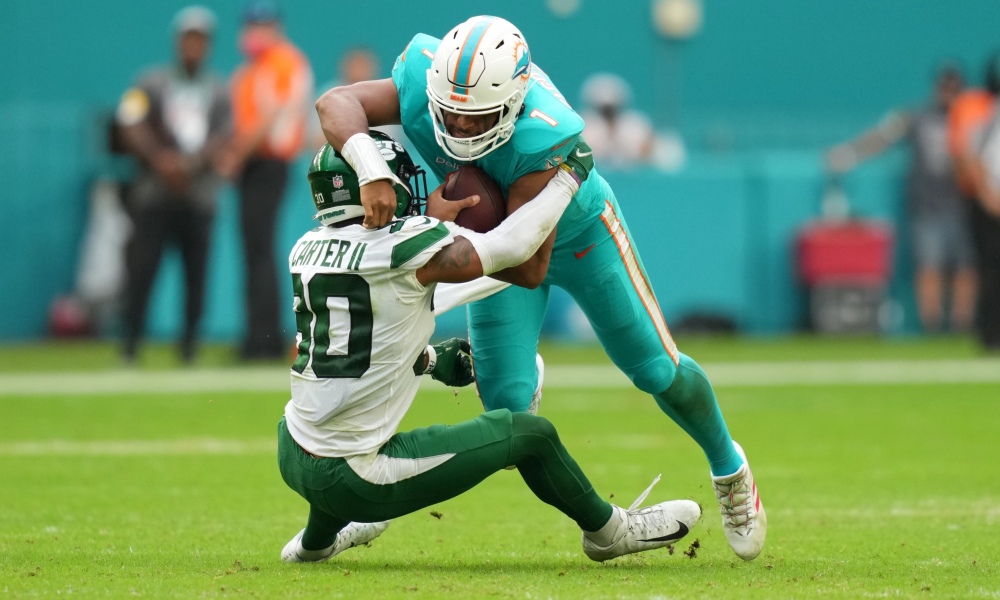 Tua Tagovailoa has the Miami Dolphins trending toward the playoffs.

He has the team on a six-game winning streak, improving to 7-7 on the season.

The Dolphins earned a 31-24 victory on Sunday at home versus the New York Jets. Tagovailoa tossed a pair of interceptions, but the second-year quarterback found a way to guide Miami to a division win. He completed 16 of 27 passes for 196 yards with two touchdowns — including an 11-yard scoring strike to wide receiver DeVante Parker in the fourth quarter. He took the Dolphins on a drive that covered 75 yards in nine plays. Tagovailoa displayed strength and toughness on a run that impressed NFL fans.

Both teams were tied at 17 in the third quarter with 4:30 on the clock. Miami had the ball with Tagovailoa in the shotgun.

He escaped the pocket, sized up a defensive back, and trucked the Jets’ defender for nine yards. Tagovailoa’s teammates celebrated the play, and he flexed his muscles as well. In the 2020 NFL Draft process, national pundits said the 2017 College Football Playoff National Champion at Alabama was not athletic enough. He proved otherwise in a marquee game at home.

Tua TRUCK STICK Tagovailoa and the 💪 to go with it! 👀

Miami needs to keep winning and have some teams lose, but Tagovailoa has it in the playoff hunt.