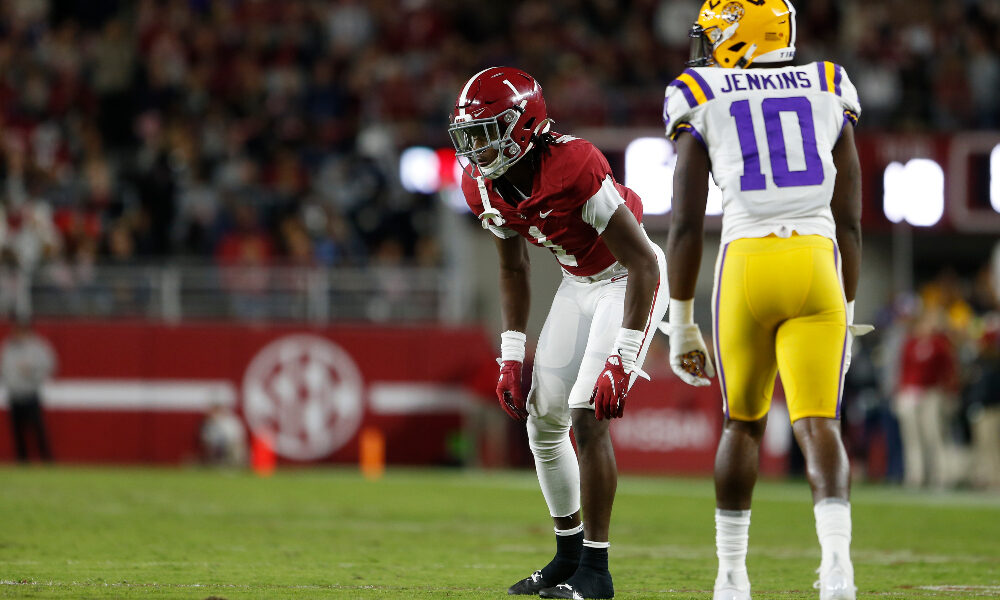 Spring practice begins in a few weeks for Alabama football.

We will be highlighting early spring positions battles and which players will earn starting roles. After a breakdown of the outside linebackers, we continue with the defense. We dissect the outside cornerback position for spring ball.

Alabama graduates its starting cornerbacks to the NFL Draft, but Nick Saban grabbed Eli Ricks from the transfer portal.

He arrives with 16 games of experience in the Southeastern Conference from Louisiana State University.

Despite a shoulder injury limiting him to six games in 2021, Ricks collected 31 tackles, six pass breakups, and five interceptions in two years. He recorded four picks as a freshman in 2020, including two returned for touchdowns. The 6-foot-2, 196-pounder brings the size, physicality, instincts, coverage skills, and ball skills of an elite outside cornerback. Coach Saban does not recruit players from the portal to sit them. Ricks has a chance to take a starting position with an excellent showing in spring practice.

Khyree Jackson came to the Crimson Tide as one of the top junior college players on defense in 2021.

He got opportunities at cornerback and on special teams, totaling seven tackles and two breakups in 12 games.

Jackson received extended time in the Cotton Bowl versus Cincinnati. He replaced an injured Jalyn Armour-Davis and posted three tackles with one breakup. The 6-foot-3, 197-pounder is enduring his first offseason with the Crimson Tide. He can be an outside corner, and the hiring of Travaris Robinson will help him. Jackson will be on a mission to start in spring practice, but he may also become a backup to Eli Ricks or Kool-Aid McKinstry. We will see how he looks once spring football enters for the Tide.

Kool-Aid McKinstry played on offense and defense at Pinson (Ala.) Valley High School, but he came to Alabama in 2021 as a five-star defensive back.

He earned Freshman All-SEC honors for his efforts — recording 25 tackles, one sack, one interception, and one pass breakup.

The 6-foot-1, 190-pounder has been training with former Tide safety Justin Woodall on his technique. Woodall told Touchdown Alabama Magazine that he’s helping McKinstry master the details of playing at corner. He has the physical skills to be good in Nick Saban’s defense, but McKinstry looks to put it all together. Khyree Jackson has more collegiate football experience than McKinstry, but the sophomore has a higher ceiling. Eli Ricks is taking one cornerback spot, and McKinstry is eyeing the other.

Other names to watch at cornerback

Helpers for Alabama in outside linebacker room