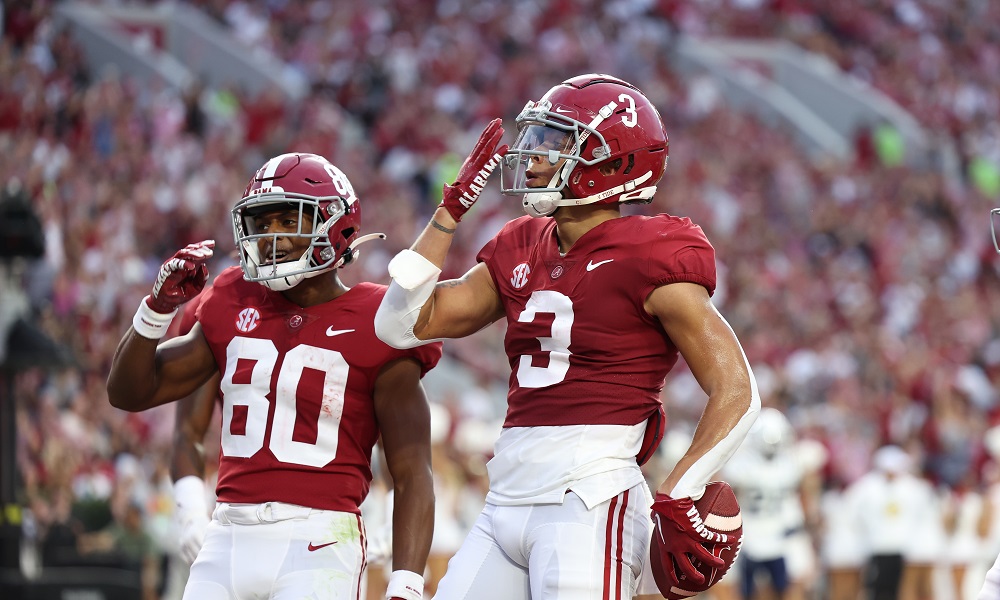 Coach Nick Saban saw two things from Alabama football versus Utah State that had not happened in his tenure: a career-high 55 points and a shutout in a season opener.

Crimson Tide fans left Bryant-Denny Stadium excited, but there are aspects needing improvement for Alabama to reach its ultimate goal. Utah State provided a mental test, but Saban and company will have their first physical test against Texas.

Alabama has to battle Sarkisian, the Longhorns, and the heat at Darrell K. Royal-Texas Memorial Stadium.

Fans and media pundits saw creativity from Bill O’Brien, huge plays from Bryce Young, young wide receivers, and a defense that stifled the Aggies. Before it battles the ‘Horns, we dive into the five biggest takeaways from Alabama’s victory over Utah State.

1. Bryce Young is on his way to repeating as a Heisman winner

Bryce Young was dangerous in 2021 as a first-year starting quarterback, but he has more confidence as a passer and runner.

His body looks thicker, and it appears he gained more speed in the offseason. Young missed a few throws against Utah State, but he totaled more incredible plays at Bryant-Denny Stadium. He tied his career-high for touchdown passes in a single game (five) and had six scores total. Young showed he has chemistry with the wide receivers. He became the first Crimson Tide quarterback since Jalen Hurts to record 100 yards rushing. Hurts totaled 101 rushing yards in 2017 versus Mississippi. Young dazzled fans with 100 yards rushing and a touchdown on five carries. He displayed nifty moves on a few runs, including a 63-yard run.

RELATED: Nick Saban explains why Emil Ekiyor did not start vs Utah State

The 6-foot, 194-pounder put a euro step on an Aggies defender and had Tuscaloosa rocking.

Young had 295 yards and six scores in a season opener. Archie Griffin was the last player to win back-to-back Heisman trophies in 1974 and 1975. After his performance, Young is on his way to repeating as a Heisman Trophy winner.

2. Alabama has an unlimited wealth of riches at wide receiver

No one has separated from the group as the No. 1 wide receiver, but that is good for Alabama.

The Tide has an unlimited wealth of riches. Traeshon Holden, Jermaine Burton, Kobe Prentice, Isaiah Bond, Kendrick Law, and Christian Leary got involved against Utah State. Holden, a junior, led all receivers with five catches for 70 yards and two touchdowns. Bryce Young told reporters in fall camp that Holden stepped into a leadership role, and they saw it.

Holden is very comfortable working back to Young and making plays. Kobe Prentice, a freshman, had a marquee impact. He totaled five receptions for 60 yards. Coach Saban told the media that Prentice is what Alabama looks for in a slot receiver. His hands, routes, quickness, and competitiveness are great fits for the culture. Jermaine Burton caught five passes, including three from Young. The transfer from Georgia totaled two touchdowns after having five all of last year with the Bulldogs.

He is excited about the chance to win a championship with this team. Bond and Law, both freshmen, each had two catches.

Bond showed tremendous speed on a reception late in the fourth quarter. He scores on a screen pass from Ty Simpson if not for a penalty. Opposing defenses will not know who to roll more defenders toward if all receivers are playmakers.

3. Bill O’Brien is embracing creativity as a play-caller

People have been calling for him to be more creative, and he showed some looks versus the Aggies. O’Brien put in a few four and five-wide receiver sets, he had Jahmyr Gibbs and Jase McClellan in the backfield together, he had running backs in motion as wide receivers, he had some designed runs for Bryce Young, and some good plays for Jalen Milroe as a backup. Alabama scored on all eight of its red zone possessions. O’Brien mixed things up, and it helped the Tide to have its most points in a season opener under Saban.

4. Alabama’s OL has to grow in run-blocking

Run blocking was the glaring problem for Alabama versus Utah State.

Jahmyr Gibbs and Bryce Young had some explosive runs, but the Crimson Tide could not consistently gain positive yards between the tackles. The left side of Alabama’s offensive front got collapsed by the Aggies’ defensive line. Tyler Steen will grow more at left tackle with reps, and Javion Cohen missed time in fall camp at left guard because of learning about his mental health.

The pass blocking looked good, but Alabama has to open run lanes for its backs.

Eric Wolford will have this corrected.

5. Alabama’s defense has the potential to be the best of the Saban era

Alabama’s defense pitched a shutout in the season opener.

Nick Saban has produced some elite defenses in Tuscaloosa, but this year’s group was the first to record a shutout in its first game. This unit has an opportunity to be the best of the Saban era. It did not record a sack; however, the first-team defense allowed 58 yards offensively to Utah State and one first down. The backups did not relinquish the shutout as the Aggies totaled 136 yards. Everyone on defense remained disciplined, read their keys, stuffed the run, and pressured the quarterback (four quarterback hurries). Utah State is not an elite opponent, but it was good that the Tide executed on defense.

Alabama had one penalty in the first half.