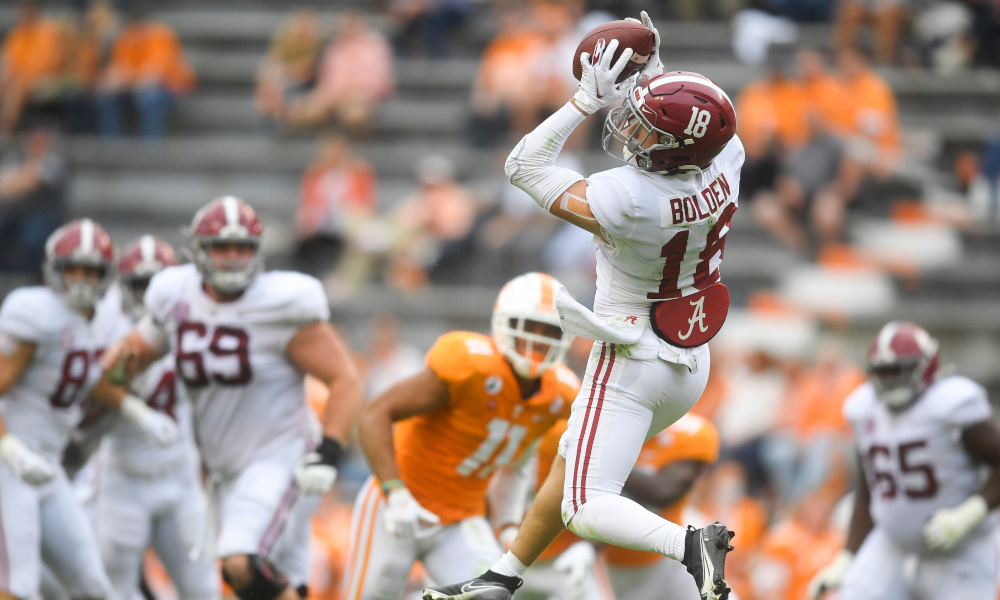 We are on our second veteran receiver for the Tide, and it is Slade Bolden.

–Summary: He begins the journey in spring practice, but this fall we will see what Slade Bolden is at wide receiver.

A native of West Monroe, La., Bolden was an all-purpose player in high school. He played quarterback, receiver, and defensive back, earning the Gatorade Player of the Year honor in 2017. He arrived in Alabama’s 2018 signing class with Jaylen Waddle and Xavier Williams.

Waddle became the undisputed star of the group, but Bolden and Williams are fighting to see who emerges between them. Bolden enters his fourth season with the program and he adds versatility to the Crimson Tide’s receiver room.

In 2019, Bolden caught passes, ran the ball out of the wildcat formation, and threw a touchdown pass.

He stepped up in the absence of an injured Jaylen Waddle versus Tennessee and recorded career-highs for receptions (six) and receiving yards (94) in a 48-17 victory for Alabama. Bolden would put together a good showing against Arkansas, totaling four catches for 43 yards.

All of his receptions resulted in first downs for the Tide, and he continued the success into the postseason.

He tallied seven catches combined versus Florida, Notre Dame, and Ohio State — including his first career touchdown catch against the Buckeyes in the College Football Playoff National Championship Game. His two receptions versus the Gators and two catches against the Fighting Irish went for first downs. As a return specialist, Bolden returned seven punts for 49 yards in 2020.

He secures the ball, possesses quickness, and is experienced, but Bolden lacks breakaway speed.

Regardless of him being a good possession receiver, he is not the type to burn defensive backs downfield.

Alabama signed a speedster in Christian Leary, and Bolden will have to fight to fend him off.

Leary carries the speed of Henry Ruggs III/Kenyan Drake and has route concepts too.

If he holds off the freshman, Bolden will remain the starter in the slot.

He has talent, but how much will be asked of Bolden? We will see in the fall, but he is doing well so far in spring practice.