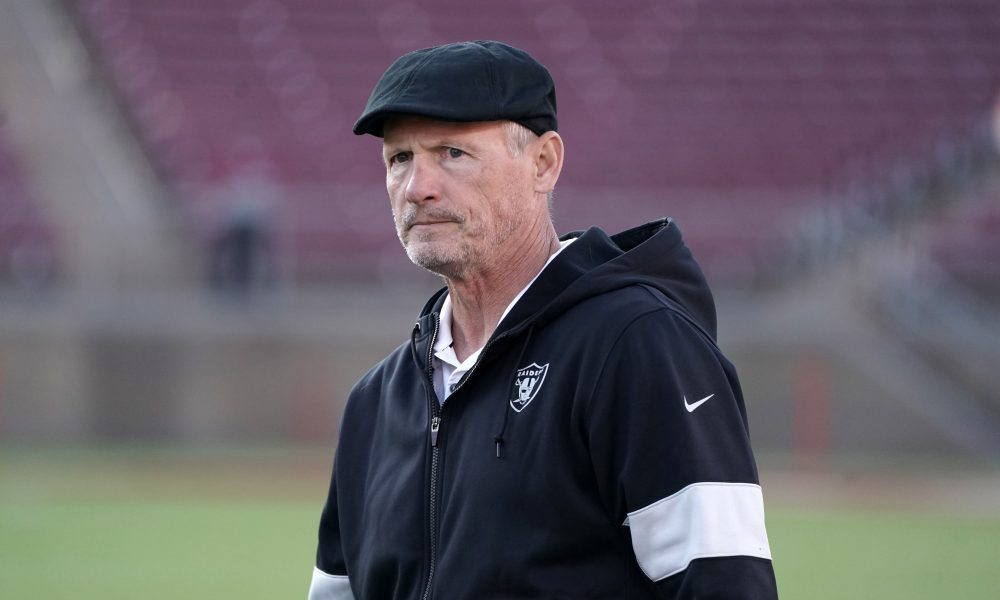 On Wednesday the Alabama Crimson Tide had a rather prestigious guest on hand for their mid-week practice. Oakland Raiders general manager Mike Mayock was spotted at the Alabama players facility ahead of Nick Saban’s press conference.

Seems as if he likes what he sees from the Crimson Tide after drafting RB Josh Jacobs(@iAM_JoshJacobs ) in the 2018 draft.

Oakland is projected to have a top 15 pick in 2019 via the Chicago Bears.

Mayock, who is in his first season at the position for Oakland has performed quite well in a short period of time. Oakland, led by head coach Jon Gruden, is currently 5-4 and in the hunt for one of the last wild card slots in the AFC. He was also instrumental in helping the team move on after the Antonio Brown fiasco and has evaluated young talent extremely well multiple players from the 2019 NFL Draft are already contributing to the team.

None more so than former Alabama running back Josh Jacobs who has rushed for 811 yards, seven touchdowns and averages 4.8 yards per rush. Jacobs is also the front runner for offensive rookie of the year and by quite a wide margin. So now that Mayock has already hit on one former Alabama player why not go back to that same talent pool?

For starters, this Oakland team has three areas of need where they will look to improve. They need an edge pass rusher, a legit number one receiver and a corner. Fortunately for Mayock, the Raiders own the Chicago Bears first-round pick this year from the Khalil Mack trade from a year ago so they’ll be able to cross off two of these needs on day one of the draft. As of right now, that pick is projected to be the 14th pick and their own pick is slotted at number 17.

So which Alabama players could get scooped up by Oakland in those spots? Here are some possibles.

He didn’t have his best game against LSU, but you can’t judge his body of work off of just one game. Diggs has all of the tools of an elite cornerback prospect and should still be seen as one of the top defensive backs in this class. So far this season the Raiders and ranked as one of the worst pass defenses in the NFL as they give up 283 passing yards per game. The team also gives up first downs through the air on nearly 39% of opponents passes which is fifth-worst in the NFL.

Diggs would be able to make an immediate impact on these numbers. In one of the most pass-heavy divisions in football with players like Patrick Mahomes and Philip Rivers, teams need all the defensive back help they can get.

Standing at 6’2″ and nearly 200 lbs, Diggs will be able to match up with the likes of Keenan Allen and maybe even tight end Travis Kelce if need be.

Some may think this would be a reach, but this season would prove them wrong. Smith has treated 2019 as a revenger tour, getting back at all the voters who didn’t put him on the first or second-team All-SEC team and for all of the scouts overlooking him to start the season. He has been Alabama’s most productive receiver as he’s caught 50 passes for 934 yards and 11 touchdowns. Smith has also proven to be quite versatile with his game as he can run great routes underneath and also make difficult contested catches on the outside. This is exactly the type of player Mayock and Gruden want on their offense.

So far this year the Raiders offense has taken a significant step forward thanks to Jacobs and the development of quarterback Derek Carr. Although everything is running much smoother the team still needs that go-to guy who can make things happen and Smith looks to fit that role nicely. There may be questions about his size but players like Julian Edelman, Tyreek Hill and Tyler Lockett can attest that a player’s size doesn’t always matter in the league.

Here are a few more players Mayock would consider at these spots:

Derrick Henry gets recognized by his hometown
Alabama commits shine in playoffs
To Top
%d bloggers like this: