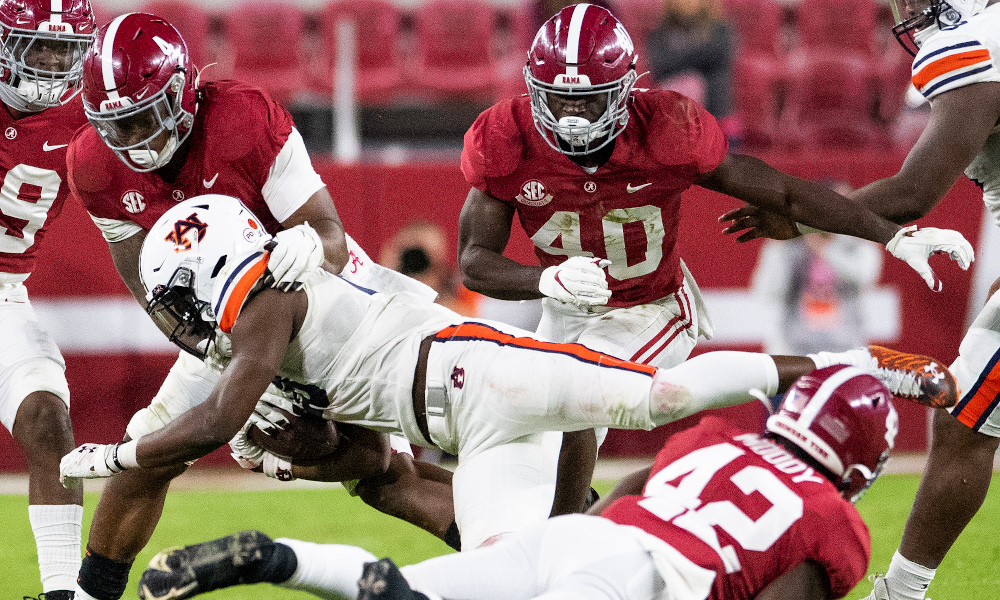 For the Alabama fans who wrote down their impactful defensive players in the preseason, not too many people had Christopher Allen at outside linebacker in the mix.

After recording a good freshman campaign in 2017, a serious knee injury over the summer held him out for 2018.

RELATED: After getting his first sack, William Anderson is now set to put college football on notice

Despite the Baton Rouge (La.) native returning a year later, Allen struggled to win the edge against the run and his speed to pressure quarterbacks was not there. He was not fully at 100 percent, but that has changed with his efforts this season.

Once a four-star in the 2017 signing class, Allen has become the unsung leader for the Crimson Tide as an edge rusher. He does not garner much of the conversation; however, his play on the field speaks loud enough.

The 6-foot-4, 250-pounder has 26 tackles, nine tackles for loss (team-high), four sacks (team-high) and four quarterback hurries through eight games. During the Iron Bowl, Allen set the tone on defense by getting the first sack of Bo Nix at Bryant-Denny Stadium. He was responsible for four tackles, one sack, two tackles for loss and two quarterback pressures in a 42-13 win for Alabama over Auburn. In the last five matchups for the Tide, Allen has started to grow his NFL Draft value for next year.

Potentially, he could be selected between the third and fourth round. He has been a critical part of the defense turning things around since the Ole Miss game. According to Nick Saban, Allen is playing with the confidence of knowing his role.

RELATED: Alabama’s offensive line is the best in college football, and it’s not even close

“I think he was a guy that was a little unsure at times of exactly what was expected of him,” Saban said of Allen. “Sometimes when guys are like that, they are afraid to pull the pin and do what they are supposed to do. I think once players mature past that and develop the confidence, then I think you start to see production. That is definitely what’s happen with Chris. He has had really good production all year long.”

Prior to talking about his confidence, Saban mentioned the size and power Allen has.

With him becoming more sure of himself, the redshirt junior is looking like Anfernee Jennings from 2019.

Jennings, a native of Dadeville, Ala., was Alabama’s leader for sacks (eight) and tackles for loss (12.5) last year. He was voted a permanent team captain by his peers and was selected in the third round (No. 87 overall) to the New England Patriots in April.

Jennings bounced back from an injury to improve his draft value, and Allen is doing the same thing.

He will look to have a field day in LSU’s offensive backfield this weekend at Tiger Stadium.