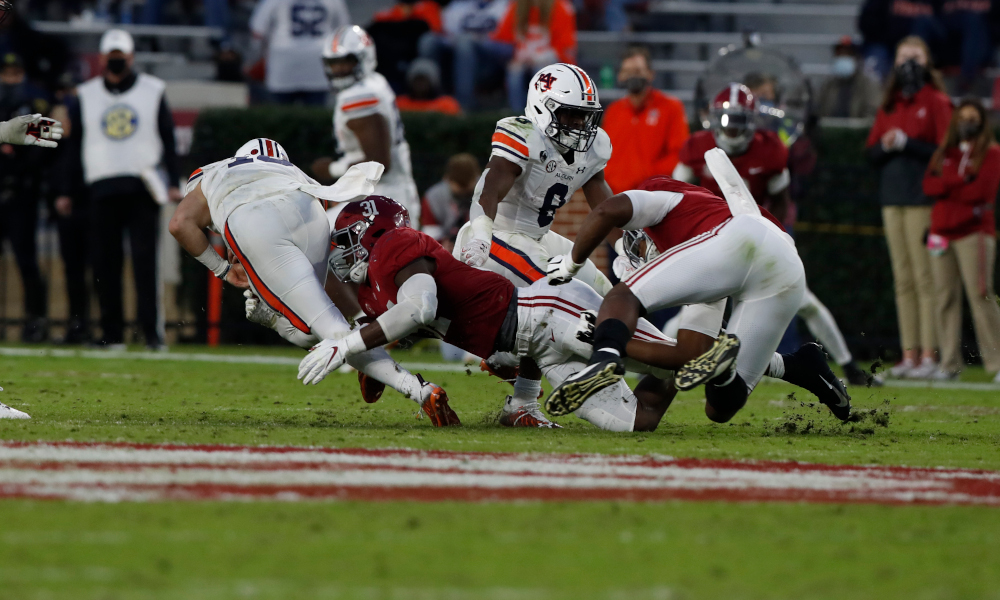 It only took one sack versus Georgia in 2015 for quarterbacks to start having nightmares about Tim Williams.

A native of Baton Rouge, La., Williams parlayed his first career sack into having 10.5 that year and he ended his tenure with 19.5 sacks combined in 2015 and 2016. All the stress comes in trying to make the first big play of a collegiate career. Once it happens, players are able to exhale, focus on the game and have fun.

William Anderson, a five-star via Hampton, Ga., is a true freshman at outside linebacker that Alabama fans are comparing to a member from the Crimson Tide’s most popular defense in the 2016 campaign.

Anderson, like Williams, had to push before earning his first sack.

RELATED: Alabama’s offensive line is the best in college football, and it’s not even close

He was a monster at Dutchtown High School and despite quarterbacks avoiding him in his first seven games, Anderson’s work paid off last week in the Iron Bowl. Bo Nix could not escape the speedy edge rusher, as Anderson tracked him down for a sack.

The 6-foot-4, 235-pounder turned in his best outing of the season. Not only did he have Nix running for his life, but he also totaled four tackles, 1.5 tackles for loss and two quarterback pressures. Anderson made it difficult for the Tigers to run the ball, especially with him on the edge. Auburn tallied 120 yards rushing, but it took 42 carries (2.9 yards per rush) to get it done.

Prior to Alabama’s 42-13 victory over the Tigers, Anderson had been surging on defense.

Since the second half against Georgia, he recorded five quarterback hurries, two tackles for loss and forced eight turnovers — including three returned for touchdowns. Anderson played a role in both pick-sixes for Patrick Surtain II and Jordan Battle, while his presence helped Malachi Moore return a 28-yard fumble recovery for a score in a meeting versus Tennessee on the road.

During the last five games, his performance has led to the Tide surrendering 11.4 points per contest.

Much like Williams, Anderson can now relax and go after the quarterback. He is seventh on the roster for total tackles (27) and is tied for third in tackles for loss (4.5).

Of the team’s 39 quarterback hurries, Anderson leads the group with eight. He has been a force all year and he’s just getting started.