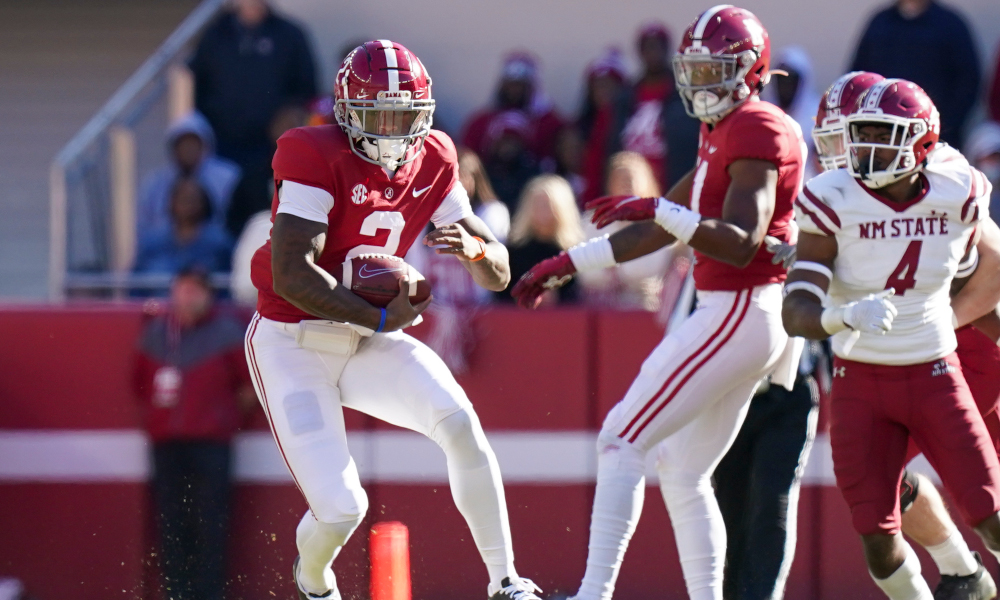 Alabama football did not finish the 2021 season with a national championship, but its fans are focused on spring action.

Eleven players declared for the NFL Draft, but seven juniors – including five on defense – decided to return to the Crimson Tide for another season. Tide fans are excited because they believe the program will return to the College Football Playoff National Championship stage and finish the job. The push for Nick Saban’s eighth national title begins in spring practice.

Competition will open at several spots, and the best athletes will win.

We look at five positional groups for Alabama fans to be excited about in the spring.

Alabama loses Jameson Williams, John Metchie, and Slade Bolden to the National Football League. All three wide receivers played important roles and helped a young team advance into the CFP National Championship Game. Crimson Tide fans will miss them, but the program returns a roster full of talent for the spring. Traeshon Holden, Ja’Corey Brooks, Christian Leary, Agiye Hall, and JoJo Earle are back. All five players saw action on the field in the 2021 season.

The Tide will have all receiving positions open for competition. It will be interesting to see who wins the role in the slot between Leary, Earle, Prentice, and Anderson. All four have speed and incredible playmaking abilities. Holden and Brooks may battle for the “Z” position while Hall (6-3/195) has a chance to win the “X” spot for Alabama.

Injuries hurt the depth of Alabama’s running back room in 2021.

Jase McClellan, Roydell Williams, and Camar Wheaton suffered knee injuries. The Tide will return to a stacked roster in the spring with seven backs. McClellan, Williams, and Wheaton are healthy, and Trey Sanders is back. Alabama grabbed Jahmyr Gibbs, a transfer from Georgia Tech, out of the portal. He totaled 1,800 all-purpose yards and seven touchdowns last season.

The pecking order for the group will be intriguing as people look to see if Alabama can keep all seven backs. Who will be its one, two punch? Who will serve as the change of pace runner? Both questions will solve themselves when players start practice.

Henry To’oto’o made fans smile with his decision to return to Alabama for his senior year.

He totaled 112 tackles in 2021 for the Crimson Tide coming from Tennessee. To’oto’o captains the defense as a middle linebacker, but who lines up next to him? Christian Harris declared for the NFL Draft after three seasons with the Tide. Alabama will have competition with Deontae Lawson, Kendrick Blackshire, and Demouy Kennedy for the job.

All three have the skill set and body structure for the position. Lawson and Kennedy are in-state prospects from the Mobile (Ala.) area. Alabama alums such as C.J. Mosley, Reuben Foster, and Rashaan Evans started as weakside linebackers.

Blackshire, a native of Duncanville, Texas, loves to hit. He played special teams in 2021, but Blackshire was an imposing specimen in high school. He worked on improving his lateral quickness and footwork before arriving on campus. Blackshire has the make-up of a dominant player. Fans are itching to see him become a breakout star.

Alabama loses Josh Jobe, Jalyn Armour-Davis, and Daniel Wright, but everyone else is back in the defensive secondary.

Jordan Battle turned down a potential first-round draft status to return to school.

DeMarcco Hellams is back at free safety. Brian Branch and Malachi Moore return to the nickel position while Kool-Aid McKinstry and Khyree Jackson are the outside cornerbacks. The Tide pulled transfer Eli Ricks from the portal via Louisiana State University.

Jay Valai left Alabama for a defensive coaching role at Oklahoma, so Nick Saban’s next hire for cornerbacks’ coach must be a home run. The secondary can be elite, but how will personnel groupings shape out? Alabama should have a more impactful secondary in the spring.

Paul Tyson departed to Arizona State, and the Tide has a competition for backup quarterback.

Milroe, a native Texan, is a gifted athlete who is very strong. He tossed his first career touchdown in Alabama’s matchup versus Southern Mississippi at Bryant-Denny Stadium.  Milroe is an athletic quarterback that possesses a big-time arm.

Simpson, a native of Martin, Tenn., arrived on campus as a five-star in the 2022 cycle. He led Westview High School to the Tennessee 2A State Championship in 2021 and earned Gatorade Player of the Year honors. Simpson recorded 2,827 passing yards and 41 touchdowns to three interceptions. He rushed for 862 yards and 11 scores on 92 carries. The 6-foot-2, 195-pounder finished his high school career with 4,715 passing yards, 1,173 rushing yards, 61 touchdown passes, and 79 total touchdowns.

Milroe and Simpson are highly talented. Both look to put on a show in the spring game.