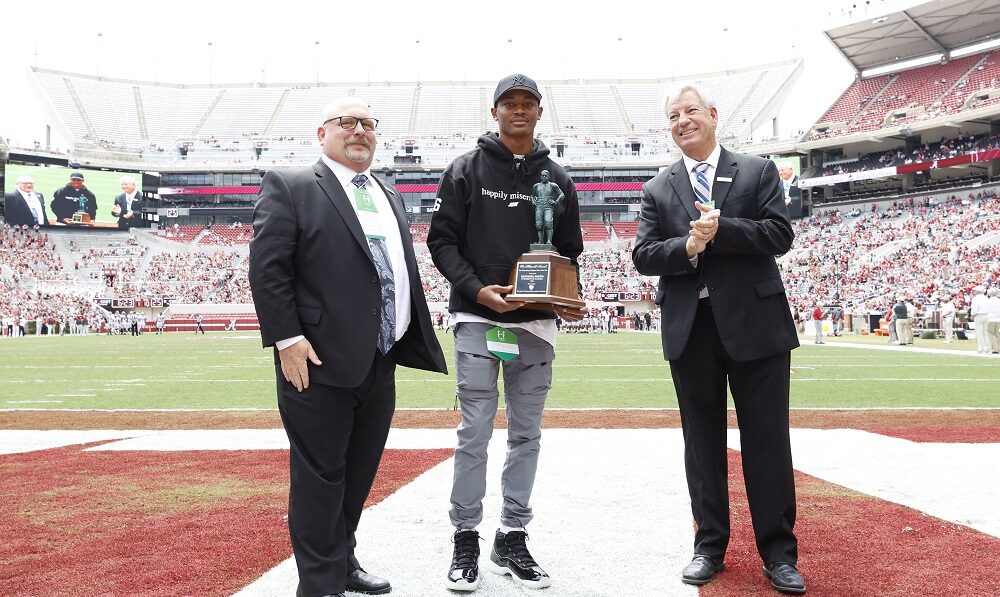 After four years of working, DeVonta Smith is wrapping his mind around being an early first-round pick.

He endured the grind of the University of Alabama and transformed himself from small-town dude to epic legend. Smith made incredible catches, game-winning plays, set all receiving records in school history, and won the coveted Heisman Memorial Trophy. He sports two national championship rings, has a couple of Daniel Moore oil paintings, and will be remembered forever as a superstar by fans.

Regardless of his accomplishments, the Louisiana native has been about answering critics.

Since the 2020 season ended, the doubters have attacked his size. Some do not believe he will last in the National Football League, and that is the ammunition Smith feeds off of. The 6-foot-1, 175-pounder received a special message from a former Southeastern Conference wide receiver who is dominating the NFL. A.J. Brown, like Smith, is not the tallest player in the world.

He was taken in the second round (No. 51 overall) of the 2019 NFL Draft by the Tennessee Titans. He has become a star in two seasons, posting back-to-back 1,000-yard campaigns.

Brown was selected to his first Pro Bowl last season after totaling 70 receptions for 1,075 yards with 11 touchdowns. People poke fun at Smith’s size, but Brown told him to ‘continue to play big.’

“Don’t let no one call you small. Keep being yourself,” Brown said to Smith. “You put the work in. You worked, and worked, and then worked some more. You turned yourself into an absolute beast.”

Brown would then compliment Smith on one of his catches, but pleaded with him to not burn his team.

A native of Starkville, Miss., Brown knows about being doubted. He chose the in-state rival Ole Miss over Mississippi State, and people are still not over it. He became a playmaker in the SEC and is now one of the best young talents in the pros.

Brown sees something huge in Smith.

The former Alabama wide receiver is arguably the best in this draft class. He looks forward to hearing his name called next Thursday night.