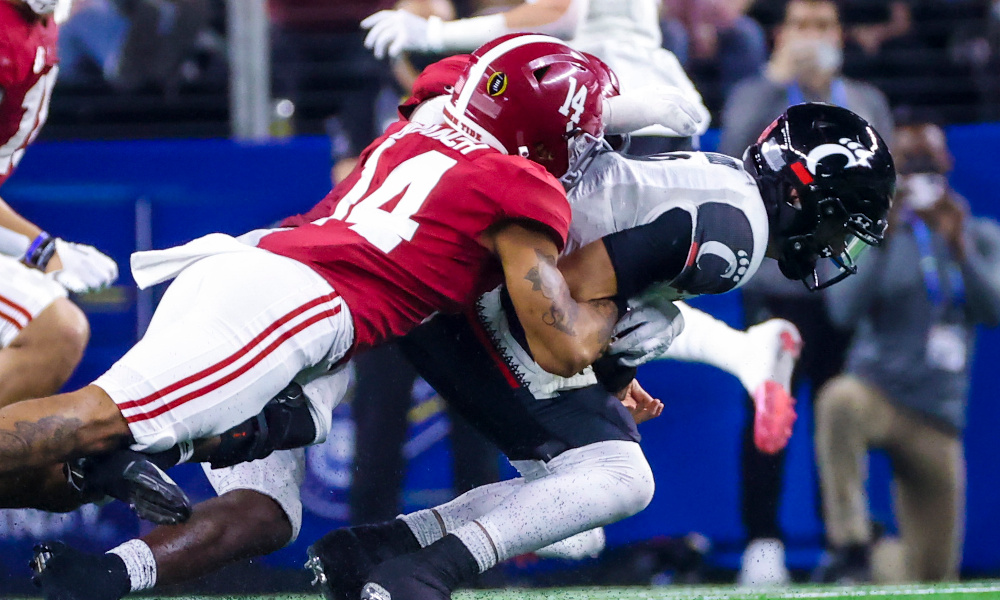 Spring practice begins in a few weeks for Alabama football.

We will be highlighting early spring positions battles and which players will earn starting roles. After a breakdown of the outside cornerbacks, we continue with the defense. We dissect the nickel and dime packages in the secondary for spring ball.

First, we look at the “star” position in nickel.

Brian Branch took a step forward in 2021, becoming the starter in nickel for Alabama.

He played his best football late in the season, but Branch finished with 55 tackles, five stops for loss, one sack, nine pass breakups (team-high), one quarterback hurry, and one fumble recovery. He collected 18 tackles, four breakups, and one fumble recovery in matchups versus Auburn, Georgia (SEC Championship), Cincinnati, and the Bulldogs again (CFP National Championship).

As a native of Tyrone, Ga., Branch came to Alabama in 2020 as an elite safety prospect.

He brings the “thump” in nickel and has shown the ability to cover receivers well.

Moore started the position in 2020 as a freshman. He recorded 44 tackles, four stops for loss, six breakups, two quarterback hurries, three interceptions (team-high), and a fumble recovery for a touchdown. Moore made Freshman All-SEC, second-team All-SEC, and Freshman All-American for his efforts. He was set up for a monster sophomore campaign, but Moore totaled 17 tackles, one interception, one breakup, and one quarterback hurry. The 6-foot, 190-pounder has elite ball skills and instincts, but injuries held him out of the College Football Playoff in 2020. Brian Branch’s emergence also relegated Moore to special teams.

Hopefully, he can return to his freshman form in spring practice.

Other names to watch at nickel

Now, we look at the “money” position in dime.

Daniel Wright is a much-needed veteran presence in the secondary.

He returns for his sixth season, carrying experience at safety and dime. Wright started at safety in 2020, posting 60 tackles, three pass breakups, one quarterback hurry, and two interceptions. He filled the role of dime linebacker in 2021, tallying 29 tackles, two stops for loss, one sack, three breakups, and one quarterback hurry. The 6-foot-1, 195-pounder is a heavy hitter in the secondary.

Wright can be a liability in pass coverage, but he excels when he’s close to the action.

DeMarcco Hellams returns for his senior year on defense.

He’s played at safety and dime, but his physical make-up is suited better at dime.

Despite an ankle injury in fall camp, Hellams fought through the season and had 87 tackles, 2.5 tackles for loss, three pass breakups, and three interceptions. He shared the team lead for picks with Jordan Battle and Jalyn Armour-Davis in 2021.

The 6-foot-1, 208-pounder enjoys being physical with wide receivers, tight ends, and running backs. He relishes making bone-crushing tackles in the middle of the field. Hellams would make an elite dime linebacker, but Alabama may keep him at safety.

Other names to watch at dime

Helpers for Alabama in outside linebacker room