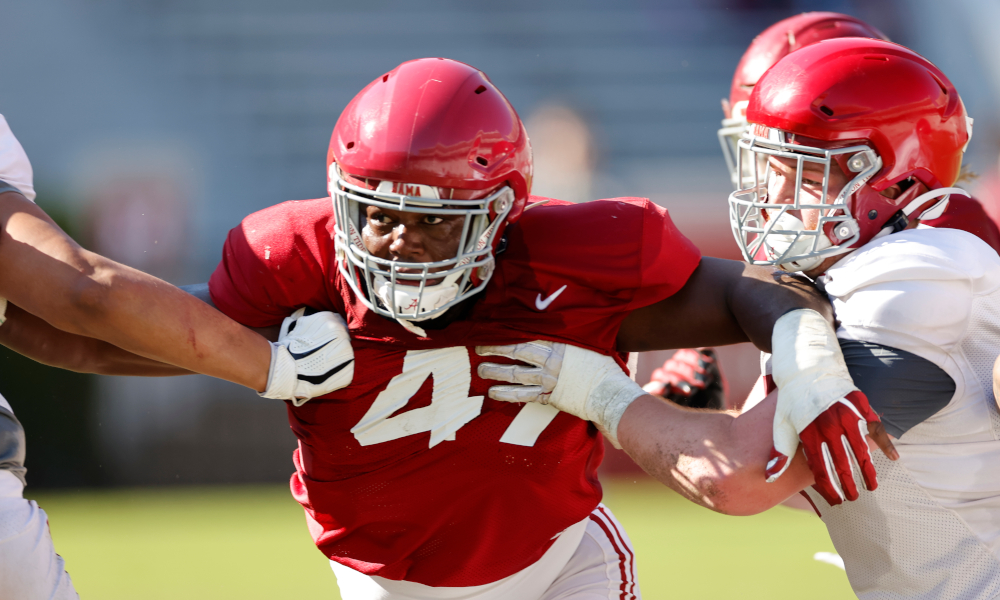 We are on the defensive side of the ball. Our fourth profile piece is on Byron Young.

–Summary: He arrived at the University of Alabama as an elite four-star from Mississippi in 2019, and Byron Young has been as good as advertised on the defensive line.

He chose the Crimson Tide over Clemson, Florida, LSU, Ole Miss, and Mississippi State after a great career at West Jones High School.

Young put on a show during his senior year of high school, totaling 125 tackles (29.5 for loss) and 17.5 sacks. Despite the injuries Alabama suffered defensively in 2019, Young showed fans his quickness, explosive playmaking abilities, and skill set to create negative plays in the backfield.

The 6-foot-3, 292-pounder at defensive end registered 23 tackles (1.5 for loss), one sack, one quarterback pressure, and one pass breakup in 13 games. He started five games versus Tennessee, Mississippi State, Western Carolina, Auburn, and Michigan. His best performance came against the Catamounts with five total tackles, including one sack.

Young took a step forward last season in his development as a pass rusher.

He posted 29 tackles, including 6.5 for loss in 13 games. As a sophomore, he added one sack and one fumble recovery to his totals. Young was twice named Defensive Player of the Week by the Tide’s coaching staff for his efforts against Mississippi State and Arkansas. He was a menace versus the Razorbacks, tallying seven stops (one for loss), half a sack, and one fumble recovery.

Young has 52 tackles through two seasons, with eight stops for loss of yards.

He excels at getting consistent penetration up front. Coach Nick Saban mentioned last year that Young is one of the quickest players on the defensive line. He stops the run, he affects the passing game, and he does not take plays off.

The junior will be an important part of the rotation, but Young has earned the chance to be a full-time starter. He is in his second season with Freddie Roach as his position coach. Young is having a great spring, and he looks to get the defense back to being a top-five group across the board in college football.