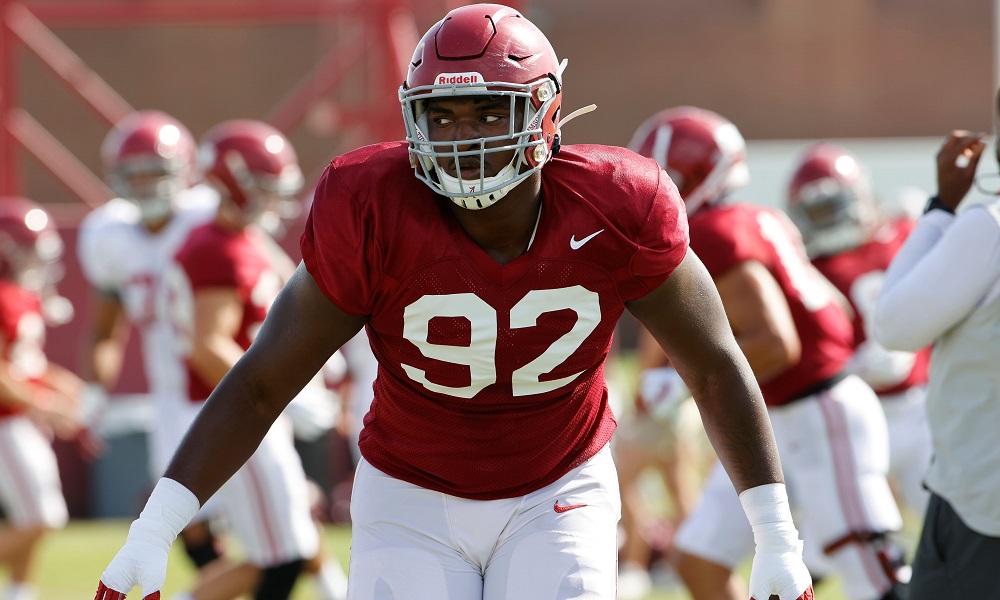 We are on the defensive side of the ball. Our fifth profile piece is on Justin Eboigbe.

–Summary: Alabama signed 11 linemen in its 2019 recruiting class, including six on defense.

Antonio Alfano and Ishmael Sopsher are no longer with the program, but Justin Eboigbe is back as a junior. He has played in 23 career games — six starts — and has had some good moments. A native of Forest Park, Ga., Eboigbe was a talented defensive end out of high school and garnered a four-star rating. He flashed signs of potential as a freshman, recording 10 tackles (three for loss), 1.5 sacks, and one quarterback pressure in 10 games. His number of starts increased last season (four), and he took a step forward in his production. Eboigbe was responsible for 19 tackles, three quarterback pressures, and one interception in 2020.

His quick hands proved to be important versus Georgia, as he recorded his first career pick off a batted pass. Eboigbe collected one of four turnovers against the Bulldogs in Alabama’s 41-24 victory.

He brings power off the line of scrimmage, but Eboigbe’s athleticism and wingspan could mature him into becoming an intriguing sack specialist.

He, DJ Dale, and Byron Young are all in an important junior year. NFL teams will be studying all three players to see which one is the most prepared for the next level. They will be competing together to help Alabama repeat as national champions and have a top-five defense; however, the trio will also be racing against each other for quality draft value.

Nick Saban likes what Eboigbe provides, but can he separate himself as a playmaker?

This spring allows him to do it. He needs to show the coaching staff he deserves more opportunities in the starting rotation.