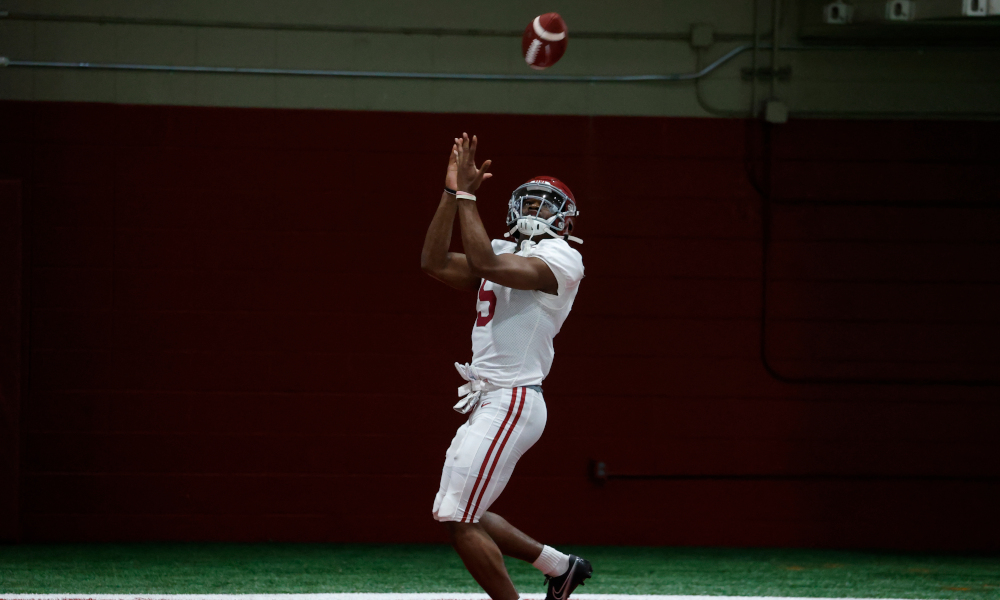 We are on our fourth receiver for the Tide with experience. It is time to look at Javon Baker.

–Summary: This is a very important spring for Javon Baker at wide receiver.

John Metchie is not practicing (recovering from injury), and it has opened an opportunity for Baker to get valuable reps.

He is starting with Slade Bolden and Xavier Williams and is doing well thus far. Baker arrived at Alabama in 2020 as a talented four-star from McEachern High School in Powder Springs, Ga.

The 6-foot-2, 195-pounder totaled 1,105 yards receiving and eight touchdowns in his junior year.

Baker was one of few players that drew much attention from Crimson Tide fans in the 2020 cycle. When he arrived on the University of Alabama campus in the summer, he impressed his teammates with his hands, speed, ball skills, and explosiveness.

As talented as Tyrell Shavers was, he entered the NCAA transfer shortly after Baker arrived.

After not seeing the field in the first four matchups, Baker played in the final nine games of the season. He totaled two catches for 15 yards, and both of his receptions came against Arkansas. His skill set to be a vertical deep threat is impressive; however, there is one area keeping Baker from becoming a mainstay on the field.

Nick Saban wants to see him grow into being a strong blocker. He has to prove himself as a big-play weapon, but he also must show consistency in his blocking too.

Coach Saban expects players to be engaged whether they have the ball or not.

Alabama will have two scrimmages before its spring game, and both “game-like” practices will serve as a moment for Baker to dominate.

If he can show consistency across the board, it will create a shot for him to get more time on the field. This is his stage to show the coaching staff he’s ready to take a step forward.