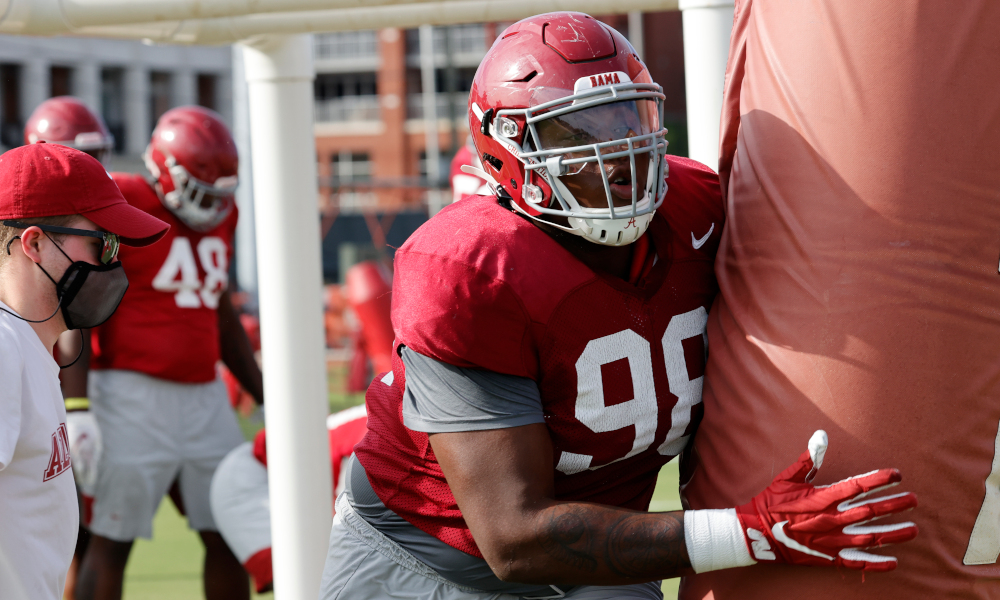 We are on the defensive side of the ball. Our seventh profile piece is on Jamil Burroughs.

–Summary: He played well at practice, and it led to Jamil Burroughs seeing action in six games last year.

As an alumnus of McEachern High School, Burroughs chose the University of Alabama over Georgia, Arkansas, Clemson, and Michigan in the 2020 recruiting cycle. The native Georgian was one of the best defensive linemen in the cycle and totaled 120 tackles, 13 tackles for loss, 11 sacks, two forced fumbles, and one blocked field goal across his career. Burroughs was one of three defensive linemen signed — joining Tim Smith and Jah-Marien Latham. Smith had the biggest impact as a true freshman; however, Burroughs did record five tackles.

He contributed in matchups versus Georgia, Tennessee, Mississippi State, Kentucky, LSU, and Arkansas. The 6-foot-3, 326-pounder impressed coaches with his power and quickness upon the snap of the football.

He has had a good spring, but Burroughs needs a solid A-Day performance to finish strong.

The sophomore is in a crowded room of defensive linemen and has to create an impact to ensure himself more playing time in the fall.

He is good against the run and has the capability to pressure quarterbacks, but Burroughs needs more opportunities to prove himself on the field.

On Saturday, he will get the chance at Bryant-Denny Stadium in the annual spring game.

Burroughs looks to take a step forward and become a critical part of the rotation upfront.